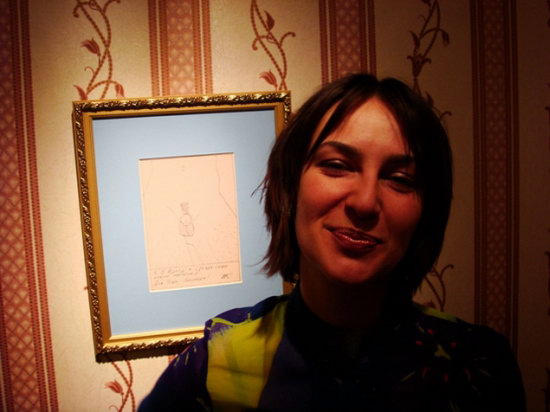 I had wanted this piece to coincide with March 8, but I don’t think it’s lost its relevance. Recently, rankings and historical exhibitions that demonstrate the classical “glass ceiling” - the higher the level of symbolic hierarchy, the fewer women - have become popular in Ukrainian contemporary art (which is slowly becoming simply “normal” art). Hidden gender discrimination has yet to become a topic of discussion in artistic discourse and so I would like to get this issue out in the open.

If you look at women’s participation in major events and art groups, sex discrimination isn’t that obvious: R.E.P has 4 women and 2 men, SOSka has 1 woman and 2 men. Artists shortlisted for the PinchukArtCentre Prize (2009) included 6 women, 10 men and 4 groups. The Malevich Prize was awarded to a woman in 2008. Women are given support from institutions and opportunities to present their projects on equal terms with men. But if you analyze status and financial aspects of art, the proportion of women decreases: among the 10 participants at the Kyiv.Fine Art Gallery’s opening exhibit “TOP-10” (2007) only 1 was a woman. The list of 10 most expensive Ukrainian artists according to “Focus” magazine (2009) includes 1 woman (Evgenia Gapchinska’s 3rd place deserves special attention), and there was also only one (Zhanna Kadirova in the category “Youth, forward!”) in the “Ukrayinska Pravda” (2009) list of 10 most successful artists.

At a recent auction, Phillips de Pury & Company (London, 29 June 2009) sold 6 paintings by Ukrainian contemporary (male) artists. Sotheby’s in London (9 June 2009) sold 9, including one by Oksana Mas (this time the most expensive). The website of the project “Modern and Contemporary Ukrainian Art since Independence: 100 Artists”, which represents “high-profile” artists mostly of the older generation, gives a good idea of where female artists stand in the symbolic hierarchy – there are only 16 in the top 100. The situation is similar in the field of art historization and canonization over the last 20 years: there were only 2 women in the retrospective exhibition “New Wave” (2009, National Art Museum, Kyiv) dedicated to art of the late 80s–early 90s; the project “Red Forest” (2009, works by “seven seminal Ukrainian artists of the 1990s from the collection of PinchukArtCentre)” had none.

The following two quotes epitomize the prospects for women in contemporary Ukrainian art after the period of “endurance” of 1990-2000s:

"Les Reines Prochaines, a very interesting artists’ group from Switzerland asked us last year: “Why is it that only women are working in the cultural field?” I am very sorry to tell you that this is still a very patriarchal society. Cultural work is simply not profitable and it is therefore left to the women.” Yuliya Vaganova, director of the Kyiv Center for Contemporary Art, 2007.

“In the 30s, 40s, and early 50s, American art wasn’t big business. In the beginning, good art was made by a small group and valued according to individual criteria. Regardless of the benefit that came from the maturation of American modernist art, an undeniable side effect was its incredible commercialization. When sales and promotion became an extremely profitable business, female artists were alienated…the art world fell under the influence of commercialism, which had never been so unbiased towards women as the relatively free and open art sphere.” Elizabeth C. Baker, 1973. [1]

This duals forecast looks quite realistic, in spite of the relative popularity and commercial success of many artists (Zhanna Kadyrova, Oksana Mas, Vlada Ralko, Marina Skugareva, Olena Turyanska, Lesya Khomenko, Oksana Chepelyk and others), as the less noticeable thematic discrimination is at the same time more dangerous. Ukrainian women’s art lacks a solid foundation – meaningful dialogue with predecessors, a conceptual field capable of evaluating and providing value to positions and topics selected by the authors.

Processes of building symbolic hierarchies, which are dependant on key players in the artistic field (men – gallerists, curators, collectors), remain patriarchal, and while they don’t necessarily object to, they don’t support feminist expression either. Furthermore, as members of the educated middle class freely engaging in professional activities, women artists, who don’t encounter explicit sexist barriers and are encouraged by family and friends, don’t have enough life experience and theoretical knowledge to recognize the patriarchal gender order in Ukraine. Even with classical feminist gestures (such as handicrafts and symbolism of clothing) they don’t use the potential of this critical position, appealing to “universal” issues (i.e. criticism of consumption).

Only a few female authors openly and consistently criticize gender discrimination in art and society (Alevtina Kakhidze, Oksana Chepelyk, Alina Kopytsia). Nikita Kadan and Anna Zvyagintseva publicly declare their feminist self-awareness. But in general, this topic remains unspoken (there was no public response to Alevtina Kakhidze’s performance “For Men Only”).

Aggressive anti-feminism characteristic of all post-soviet societies ends with the arrival of a new generation of women on the public arena – rebellious nymphs and Barbies, FEMEN and not only. And so it’s time for new feminist conversations and discussions. Walking around Bucharest recently, I fell in love with the way Romanian women smoke. On the street, in caf?s, young, old…they hold the cigarette so naturally, they make gestures, they’re passionate about communication. In Ukraine, the body of a woman that smokes is different – as if somewhere deep inside, on the unconscious level, she knows that smoking is bad for her because she’s a potential mother. It’s scorned, it’s improper. Only loose and depraved women smoke….That’s why Ukrainian women smoke as if they’re in the school bathroom - vulgarly, quickly and stealthily. This little difference has amazed me for several days now – because if even body language is conditioned by the gender order, then what is there to say about the language of art.

1. Art and Sexual Politics: Why Have There Been No Great Women Artists?, Collier A Division of McMillian, p.115