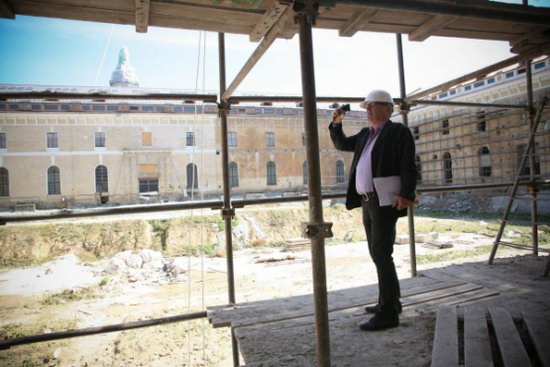 It seems that even the laziest and most indifferent citizens, stuck in traffic jams because of endless emergency road repairs, gazing at the sparking new multi-million dollar stadiums, listening to the endless news reports about Ukraine’s latest loans, are beginning to wonder about the price the country will pay for hosting Euro-2012. Fine, so along with the fantastic external debt we’ll at least have new roads, new terminals at Boryspil airport and cool lawns at the new stadiums. But what will be left in the art world after 2012? Will anything even be left? All of the major art institutions are already planning projects for Euro-2012, with the grandest among them all to be the first Ukrainian biennale at Art Arsenal – Arsenale.

The cultural programs of previous European football championships were full of pop music concerts, designer parades with football themes, food festivals and fireworks – which seems completely logical given the reason for the expected invasion of tourists. Logically, next year Ukraine should expect an increase in football, not cultural, tourism: the cultural program of the average visitor will at most include the Kyiv Pechersk Lavra and PinchukArtCenter (in Kyiv), and at least the bars in the central parts of Kyiv, Donetsk, Kharkiv and Lviv.

For now, I’ll put aside the question as to what extent Ukraine really needs Euro-2012, the stadiums, the terminals and this wave of football and beer tourism for six weeks. My question is simpler: what do contemporary art exhibitions, and especially a biennale, have to do with it? Of course, we can assume that Ukraine wants to go down in the history of late 20th- and early 21st-century art as the organizer of the first football biennale. After all, Arsenal is a good football word.

But are we certain we need such laurels? I’m using the term “we” because the organizer and implementer of Arsenale is the state enterprise Mystetskyi Arsenal, which declared a budget for the project of 38 million hryvnias, half of which is to come from the state. Interestingly, previous large-scale non-commercial projects (not the presentation of the new Lexus, information about which is no longer accessible on the new Mystetskyi Arsenal website, or art fairs) – “Space Odyssey,” “Book Arsenal,” and “NEZALEZHNIndependent” were held under the banner “the government didn’t give us any money, so we’re doing what we can.”

True, the lack of proper financial support was overcome not by organizing smaller (and, perhaps, more profound) projects, but with flashy advertising placed amid the art works, the friendly and not so selfless help of commercial galleries and artists (who participated for free, while the selection of works was often dictated by whether they could be delivered and mounted).

But next year, 19 million hryvnias in public funds (which we, by Andriy Portnov’s very apt observation, for some reason still call “the state budget”) will appear from the mysterious Euro bin and another 19 million hryvnias will come from generous sponsors. With this money, Ukraine will get a major multi-venue exhibition in which 15% of Ukrainian artists will participate. It will take place in the summer, when the football fans are to come to Kyiv, and when most cultural tourists (including Ukrainian tourists) will try to steer clear of the Ukrainian capital. Ukraine risks getting nothing more out of this money over the next couple years because corporate and private budgets, not just public ones, have been exhausted until 2013, as all funds are being reserved for Euro-2012. This year already, large companies that in the past sponsored at least big art events, are saying that they won’t have money for several years.

Smaller art initiatives, which even in the past didn’t have many opportunities for support when public funds for publicity were nearly untouchable and corporate funding went almost exclusively to large high-profile events with a significant public relations component, are doomed. But maybe sacrificing something small to get something big isn’t so bad? To bring a high-quality global context to Ukraine and by doing so provide a “unique chance for Ukrainian artists to become on a par with the authors that define the face of world art.”

Let’s leave discussions about how much today’s art world really needs a biennale to expert forums. I’ll just point out that there are currently more than 200 biennales, of which only about a dozen are truly important in the art scene. The rest are typical “exhibitions of the achievements of the art establishment,” to which you see the same, albeit well-known, figures come in the name of cultural tourism and development of the local environment. So, will a “cultural tourist” travel to Ukraine or Singapore to see someone they just saw in Berlin/London/Venice/Kassel/Stockholm? As for the local cultural tourist in summer 2012 – see above.

It is because of this globalized superficiality that many local biennales are criticized in the professional world. After all, having exhausting local financial resources, they don’t have a significant impact on the local artistic context. The problem isn’t not “being on a par with the authors that define the face of world art.” When it comes to problems, Ukraine isn’t very different from Romania, Singapore or Morocco: lack of adequate educational models, access to opportunities for quality modern education, mobility (opportunities to travel the world for training, residencies and exhibitions), opportunities to work in one’s own country – existence of various art centers, platforms, initiatives and a flexible system of public and private financing. In short – responsible and far-sighted cultural policy.


And only an insistent and consistent approach to solving these problems, and consequently the creation of something rich, varied and apart from international artistic life, eventually leads to the appearance of local “faces of world art.” Although in reality, when there is such cultural richness, the faces for some reason are naturally forgotten (they’re not even talked about at major events in London, Berlin or Stockholm). I don’t want to go into how much can be changed in the artistic environment with 38 million hryvnias. After all, the issue isn’t in the size of the wallet, but how and why this money is spent.

However, I think it’s worth noting that exactly a year ago there was talk in Ukraine about a biennale, but not the “first Ukrainian” but the 10th or 11th nomadic European biennial – Manifesta, one of the most important art events in Europe. The Manifesta is held every two years in European cities and regions that aren’t part of the cultural mainstream: Limburg, Belgium (2012), Murcia, Spain (2010), Trentino, Italy (2008), etc.

In promoting the ideal of the biennale as a platform for social changes necessary for the region where it is held, Manifesta offered Ukraine to host the biennale in 2014 or 2016. Why not 2012, you ask? Because the exhibition part of the Manifesta is only the cherry on the cake that requires at least a year of curatorial research into what the specific local context needs and in what form, and up to two years of educational and awareness projects for the local audience and art environment, plus residencies for international artists who are invited to work with the given region and its problems and issues.

Ukraine was asked last year about its official, government level, interest in the project and possibility of providing 40-50% of the financing for three years – up to 2 million euro. The Ministry of Culture gave a very comprehensive answer: we support the idea but we don’t have the money. A year later, the money was found – but not for three years of education, communication, research and thorough (often inconspicuous) work plus the exhibition that our officials love so much – but for eight months of preparation of the largest space in Europe for Euro-2012. All that’s left is to persistently believe that the Ukrainian team will nevertheless come out the victor.