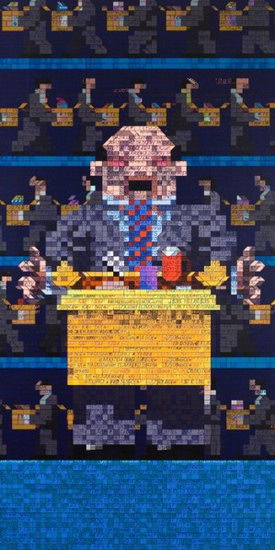 Wroclaw (Poland) is currently hosting the WRO-2011 media art biennale (May 10-15), organized by one of the most respected institutions in the world that archives and supports media art – WRO, founded back in 1989. Lately this institution has become a reliable refuge for young Ukrainian media artists, who, unfortunately, don’t have an artistic platform like WTO, which gives artists from around the world the opportunity to create new media works at home and exhibit them at their biennale. This year Ukraine will be represented by three media artists: Serhiy Petlyuk (Lviv), Andriy Linik (Lviv) and Oleskiy Saj (Kyiv). The first two created their works at WRO. The organizers of the biennale invited me, as a media art theorist, to write an article for the WRO website describing the situation of media art in Ukraine today, given that the topic of this year’s WRO is “Alternative Now”. The article “Media Art in Ukraine: ontological or hypothetical status?” became the answer to the question: are there alternatives for the development of media art today in Ukraine?

I invite the readers of this article to reflect on this issue together at 15:00 on June 7 at the Visual Culture Center at NAUKMA. As part of the media art forum “New Media Ukraine”, which is this year’s satellite project of MUHi-2011, a round table discussion of the same name will be held.

Media art in Ukraine has a strange nature: On the one hand, it has a twenty-year-old history; on the other hand, it has an undulating, unstable, regional and unsystematic character. Each of these characteristics results from different causes. The undulation is due to foreign institutions' waxing and waning interest in Ukraine. For example, media art began to actively develop in Ukraine when the Soros Center for Contemporary Art supported it.

The main reason for the instability of media art is the lack of any art institution that could support the undertakings of media artists. Most often interest in new media is merely a stage in the creative biography of a Ukrainian artist or designer (the latter being a frequent professional fate of media artists who worked in the '90s).

The regionalism, of course, is caused by the development of an art scene only in big cities in Ukraine: Kiev, Odessa, Kharkiv and Lviv (and there is no "etc."; the only exception is the provincial Kherson). So Lviv citizens are "geographically lucky" to live near Poland, since they can often create much more interesting and technologically more advanced projects through Polish institutions that support media art, and their works stand out in comparison with other Ukrainian media artifacts.

The unsystematic character is the result of all of the above, plus the shortage of educational programs in media art theory and practice at the universities and art colleges. Similarly, there is a shortage of professional institutions, conferences or seminars where new media art theorists and practitioners could exchange ideas, or even become aware of each other's existence.

Currently, however, there is a new wave of interest in media art in Ukraine, arising on several fronts at once – from the young generation of artists who have grown up at the computer keyboard; from the young generation of scholars seeking to create authentic concepts and preserve the history of Ukrainian media art; and also from certain cultural institutions that have recently shown increasing interest in the collaboration between art and new technologies.

Young Ukrainian artists' interest in creating new media art is supported by the existence of regional festivals that include media art programs: MediaNonStop (Kharkiv), Terra Incognita (Kherson) and the Week of Contemporary Art (Lviv). These festivals are an excellent opportunity for young artists to express themselves and to compare their works with those of Western artists.

The field of media art theory has also recently been experiencing quite a resurgence at Ukrainian universities. A course entitled "The Art of New Technologies" has been offered for several years at the Drahomanov National Pedagogical University for students of the cultural department and at the National Academy for Art and Architecture for future art critics. In August 2009 Karasin Kharkiv National University opened its media communications department, which also runs a Center for Media Communications and Visual Studies, offering classes, public lectures, seminars and workshops devoted to the history and theory of media art.

Cultural institutions are also becoming more open to media art. One example is the project headed by Nataliya Zhevago, who organized a series of lectures by Lev Manovich in the fall of 2010. And it is very encouraging that such a reputable institution as the Foundation Center for Contemporary Art has proposed to create an open archive of media art and an educational program on the history of Ukrainian media art, which will includes lectures by renowned artists and curators along with screenings of works that are rarely accessible today.

Another interesting suggestion came from Kiev's Bottega Gallery, which has for several years organized the Young Ukrainian Artists' [MUHi] Competition. The 2011 edition of the event will include a media art forum, consisting of an educational program, an exhibition of works by young Ukrainian media artists and a panel discussion to address important issues related to the further development of media art in this country.

One of the main discussion topics, and in my opinion, the most urgent problem in Ukraine, will be the establishment of a specialized media art institution. I envision creating a project to draw public attention to the need to establish a center for the research and practice of media art in Ukraine – an interdisciplinary refuge for artists, curators, programmers and theorists in various fields of science who wish to work in the field of media art, along the lines of the Ars Electronica residence in Linz, Austria.

A center of this kind would not have to be in one of the big cities, but certainly the location will have to have the potential to create such an institution. The proposal is therefore to focus on the tourist centers of Ukraine, where exhibitions will be visited not by city residents only but also by tourists, at least in summer. It needs to be a town with educational potential as well – a college of arts or culture, for example. Among other things, the project will provide an example of how to combine traditional and contemporary art in provincial showrooms, and will create new prospects for the development of media art in Ukraine.