Turn on the lights

© Flikr/ The Art Gallery of Knoxville 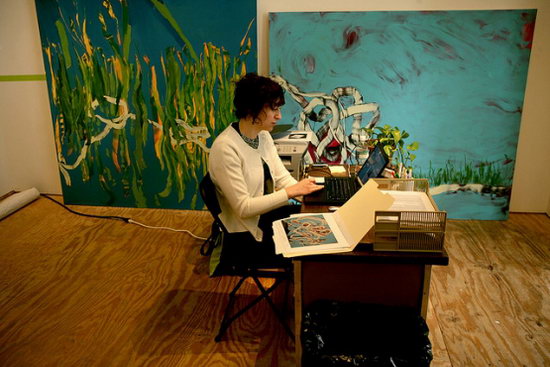 In late November 2010, Foundation Center for Contemporary Art hosted the international project “Kyiv Offline: Art criticism in the age of instant access” that focused on the need to develop among critics in Ukraine a common understanding of the role of the contemporary art critic in an age of instant access to information. One of the results of the project was the compilation of essays by project participants on the critical situation in Ukraine today.

KORYDOR is joining the discussion on the role of art criticism and will publish a selection of texts written after Kyiv Offline. The complete collection of texts will be available soon on the Foundation CCA website.
As I am writing this, the Kyiv Offline workshop has already ended and (hopefully) left all of us, its participants, wondering about the fate of contemporary art criticism in Ukraine. In an attempt to rethink and analyze all that was said during the conference, I will ponder the possible issues a hypothetical “platform” for art criticism in Ukraine may face. For the purposes of this article, I have picked three main challenges the project has to overcome to be considered successful. These are funding, quality and influence. The order in which the issues are presented below is random, as they are equally important and interrelated.

First of all, our platform, apart from simply being at the forefront of liberal thought, should motivate journalists to participate in it. And I see proper pay as the only possible means for this motivation. We cannot ignore the fact that few Ukrainian professional art critics can afford the pleasure of writing just for the sake of spreading knowledge, communicating with like-minded people or having a chance to say what they really want. The DIY spirit and the utopianism of the Internet have existed far too long (probably since the cyberpunk novels of the 1980s) to captivate the minds of Ukraine’s art critics and motivate them to maintain or participate in full-fledged online projects out of mere enthusiasm. For those of us who make a living off texts, writing for free for whatever entity is an unaffordable loss of creative effort, which could after all be directed at something other than Ukraine’s constantly evolving art scene.

Unfortunately, despite the fact that the field is opening up, few Ukrainian culture websites can afford paying freelancers at this stage. Surely we can talk, or even hold panel discussions, about the need for leftist guerillas in the art crowd who would write hard-boiled reports and gather good karma in return, but after patiently nodding to someone passionate about the left/right dichotomy, we still return to our thoughts about getting paid and buying Apple laptops. And while there is nothing wrong with seeing the world through leftist slogans or desiring reimbursement and laptops, the only option for these poor start-ups is to satiate the publication needs of master and Ph.D. students. But the idea is to have a platform for everyone, not just the local academia.

Authors’ honoraria take us to an important issue that every publication, whether digital or print, faces - funding. As with any other project, the people behind this platform should think about how it will be positioned. There are several possibilities. One is living off grants from national and international institutions, which allows for a comfortable level of independence, in addition to keeping with the DIY esthetic. However, relying on grants for survival means that there is always a certain chance of not getting another grant and having to freeze the project.

Another option is integrating into some privately run media holding, which is not in line with leftism. For example, this was successfully done by similar platforms, such as the Russian-based Openspace.ru. Still, some time and a certain amount of daily clicks are needed for the project to be valid in the eyes a possible investor.

Also, the platform may remain completely independent and get money from advertising and special projects, which I believe is the only possible way to ensure editorial freedom, coherence and quality of materials.

Apart from the money issue, which I, not being left enough probably, mentioned first, there are other important issues to consider when working on such a project. Let’s imagine for a moment that the funding was secured, and we have a beautiful online platform ready to go. This still does not mean that we have any well-written materials. The thing is that there are probably no more art critics, both amateurs and professionals, in all of Ukraine than there were in New York’s SoHo in the 1960s.

Art criticism in Ukraine, as was often stressed and reiterated during Kyiv Offline, currently resembles something more of a hobby. For most of us, being an art critic means being an art critic in addition to holding a day job. This whole trade of art writing is not taken seriously by the mainstream media since it is considered too complex and unpopular with the mass audience.

In this atmosphere, charged with a good deal of DIY-enthusiasm, it is natural that the overall quality of writing deteriorates. Therefore, the creators of this hypothetical platform will face the difficulty of having to educate its possible contributors. And since education is not a matter of a few days, our platform may either lose precious time while those who are supposed to be its voices find voices of their own.

Although the series of challenges outlined above may look quite depressing, there is always room for initiatives. Ukraine’s art critics look like people trying to find something in a pitch-black room. They walk around bumping into one another, desperately trying to see what’s going on in complete darkness. And this will continue until someone comes to turn on the lights. However, no one will, except for us.