An artist talks about the museum 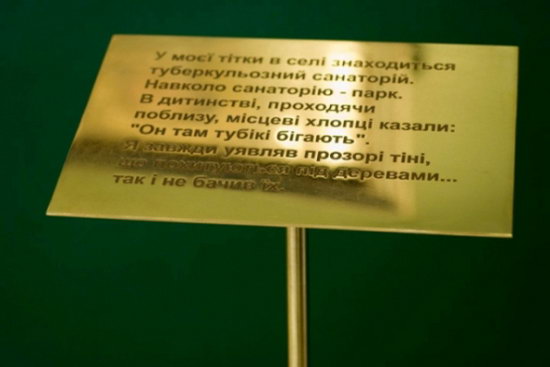 Talking today about the museum means criticizing the market’s totalization of the art space. The museum is merely a figure of rebuke when it comes to processes of art’s commodification. Talking about the development, complexity of the modern global art market, its ability to absorb different forms of artistic activity, call into being different trends of artistic innovations means criticizing the conservative, rigid, archaic art museum. And perhaps above all - the post-Soviet museum.

The museum is a product of the social contract. Different population segments and groups are united in that a museum is a space where we can go during our free time (if we have any) to meet the best art, selected by professionals. The responsibility of this selection is manifested in the invitation, even if temporary, of various forms of modern art in the pantheon of undoubted, canonized achievements into the space of tradition.

When it comes to Ukrainian museums, the first characteristic that comes to mind is neutrality. Presenting the Ukrainian museum as a haven of ultraconservatives is an effective publicistic tag, but it’s rapidly losing touch with reality. Rather, the museum is staying neutral - trying to unite its conservation function while maintaining good relations with the conservative segment of the local art community (that is to say, with its overwhelming majority) [1], and making gestures of friendliness and openness to the innovation-oriented segment. All this against the background of constant shortages of public funding, which pushes them towards new relationships with private capital, and, in turn, requires extra caution from museum staff in maintaining the publicness and independence of their institutions. Of course I’m talking only about museums in large Ukrainian cities, where there are innovation-oriented artists and private capital. In smaller cities, leaky roofs are a more pressing problem.

This neutrality of museums is the result of the fragmentation of post-Soviet society, and consequently the art world. Conservatives, innovators, isolationists, cosmopolitans, enthusiasts, and art dealers confidently assert their right to the museum space. There is a crisis of distinction, when the intensivity of the claim becomes more important than its articulation. And to satisfy everyone, you have to be nobody.

The Ukrainian museum has organizationally and ideologically come partially unstuck from the Soviet model of ideological culture, at least from its most glaring manifestations – it remains mindful of its obligation to the current figures of this culture, while cautiously trying the fruits of the capitalist cultural industry. It is gradually integrating itself into the system of international “cultural diplomacy”. In other words, the Ukrainian post-Soviet museum, with numerous reservations and maintaining certain guarantees for itself, has entered the path to reconciliation with contemporary art. [2]

In fact, the confrontation between art that imitates forms of the past and art that is innovative and modern often refer to itself in the local context of this confrontation as “contemporary art” (written in English as if to say - we’re not from here, we’re from that big, interesting world out there!) - this is the story of the post-Soviet 1990s – early 2000s, gradually fading away. The current story is of the opposition of socially autistic art that claims to be autonomous but constantly ends up in the role of simple décor, partisan art, practices by artists that see themselves as political subjects. And in this regard, the post-Soviet Ukrainian museum, having gained with considerable difficulty a step to say “there wil be room here for contemporary art”, now faces a new challenge “there will be a battle here between socially indifferent and socially motivated contemporary art”.

At this point it should be mentioned that the space of the post-Soviet museum - with its rhythm of life similar to that of a pensioner scraping by, who spends his days wiping dust from relics of the past, with squeaky parquet floors and paintings hanging on strings – not only banished new art for a long time, but was also rejected by it. Works by “the contemporary circle” were much more successful at fitting into the renovation plans of the young bourgeoisie, in spaces that celebrate their youth and competitiveness. And of course the essence of these spaces was their private nature. In this privateness, art depends on the personal interest and taste of the owners (which the artist can’t get around) who want to present themselves to the public with the help of art.

The post-Soviet public museum - with its post-ideological confusion, with its lack of space and money, with its sense of responsibility to the past and fear of the future, with its strings and dust – is a space of potentiality, mainly because it’s future is being debated. Things definiltely can’t continue the way they are – so what next?

The social contract on art’s place that the museum is based on, today, after decades of top-down stability and a period of chaos and shock, when “it wasn’t the time”, is undergoing a thorough review. And this review is not being performed exclusive by museum professionals, but different cultural and social actors, including representatives of official structures (such as the Academy of Fine Arts), small public art institutions, artists such as the “National Union of Artists of Ukraine circle”, Generation 1987, Generation 2004, humanitarian intellectuals and cultural activists. And if institutions and functionaries active in the international arts system can take part in the formation of new museum strategies aimed at eliminating the residual isolationism in the Ukrainian cultural world – then art projects “for the museum” can create opportunities to rethink the museum as an institution. The projects “Great Surprise”, “New History” and “Hostage in NAMU” should be considered as such.

I consider the ephemeralness of such projects to be a particular problem in their relations with museums. What is typical of temporary exhibitions slips out of the museum program and doesn’t take root in the exposition routine – especially performances devoid of hypertrophic appeal that last from several hours to several days. But the ephemeralness of such projects is surmounted – they become scars on the museum’s body: “Great Surprise” demonstrated the museum’s underside, dark side, that hoards discarded historical materials, while “New History” was scandalously closed a day after it opened.

Western critical practices of the 60s-80s often constituted an outcome, denial, an escape from the museum, challenging the museum space, functions and rules (Lawrence Weiner, Daniel Buren), as well as exposing the ideological and economic grounds of the museum (Marcel Broodthaers, Fred Willson, Hans Haacke). Current forms of “instritutional critique” are largely based on the understanding of a “museum as a factory” without the ability to leave the site of production (Hito Steyerl) and “internal institution” of the artist, attempts to leave that only expand its boundaries (Andrea Fraser).

Post-Soviet critical art caught the museum at a time of its disorientation, cornered and defensive. Instead of confidently adopting the government ideology, the post-Soviet museum suffers from the trauma of the removal of its ideological core. Instead of hidden corruption (which was studied by Hans Haacke), it is characterized by the clear and obvious indiscriminateness of someone on the verge of extinction, instead of a production race / consumption of new images – involuntary ascetism. It seems to me that the sad state of the post-Soviet museum is due to the fact that “institutional critique” didn’t take root in our region over these last twenty years. “Finishing off” the museum by directly referring to its historical inadequacy and cultural failure – which couldn’t be ignored – never seemed like a worthy goal to anyone.

That’s why now the post-Soviet Ukrainian museum is moving from its defensive position to peaceful negotiations with contemporary art and we should expect a local wave of “institutional critique”. It is this transformation that allows criticism the opportunity to be productive, reclaims its cleansing function. Relations between the traditional museum and modern art institutions, which are rushing to help it modernize, will not only create the conditions for critical works inside the museum space, but, most likely – in the future – will be thematized in these works. This includes relations with private institutions that open up a wide array of economic, political and ethnical issues.

Predictably, future institutional alliances will not only pave the way for new things, but will provide space for simulation and dogmatism, “local discoveries” by resinging what we have long heard elsewhere, using the museum as a tool to legitimize questionable and weak practices. The realities of this local undivided institutional landscape, in which the future hierarchy will be built, to large extent will depend on the ability of various actors to attract the museum to their side – as the supreme authority of expertise. They will inevitably include active figures of the art market and entertainment industry, privatizing the public space of culture in various ways. There remains a likelihood of ideological revenge with nationalistic or religious overtones. But it’s important to remember that above all, institutions follow the movement of artists, though not always fitting into the turns. New relations between the museum and artistic community will be meaningful only if the artist turns around and looks the institution in the face.

An artist talks about the museum – and also in the museum, with the museum, with the help of the museum. The space of communication is already full and lived-in: there are strings, security rules, constant reminders of the lack of money, (in)discrimination in attracting new sources of funding, (un)invited private / commercial / indirectly commercial initiatives, slumbering guards, tours of the permanent exhibition, squeaking parquet floors, overcrowded storage, the government’s shadow. Also occupying their seat in this communication are security / violation of disciplinary boundaries, (in)fidelity of the current audience, a new audience, comments on the exhibitions, and also the actions or objects that become rooted in the body of the museum and leave a scar when removed.

To take responsibility for the museum, take it out of its neutral state, reactivate the properties of its public space, rediscover its social meaning – isn’t primarily an institutional or bureaucratic task, but an artistic one.

The described (expected, predicted) relations between artists and Ukrainian post-Soviet museums aren’t a purely local matter. Located in a transit zone, extracted from the former system of communication and not yet entrenched in the new one, the Ukrainian museum is an experimental platform of potential, a territory where the phenomenon of the museum is its relationship with the social contract, with the politics of memory, with paths of artistic, cultural and political renewal that are open to interpretation perhaps more than in any vocal social guarantees, rightfully takes its place as a museum institution of the world. It is at this transition point that the museum is able to tell us about the future, if we ask the right question.

1. As a membersof the Artists Union of Ukraine said in an interview for a video work by the R.E.P. group: “The Artists Union, Academy of Art and National Museum are three fingers on the same hand.”

2. Although it must be recognized that there is internal resistance among renowned figures such as the director of the Kharkiv Art Museum Valentina Myzgina, the ban of the exhibition “New History” was possible only after its opening, which was the result of the museum’s cooperation with a contemporary art institution.