Our world - from its outer appearance to inner relationships that form its foundational structure – represents a historically determined and socially bound category. Even phenomena of the natural order become cultural constructs because they are not available to us in their raw infinity but rather mediated through our finite tools of perception – the way we think about nature and the world at large becomes culture.

The world is predicated on either overt or clandestine social contract which can and should be changed if some of its premises turn dysfunctional. Two forces govern the performance of this social contract: the desire to establish the continuity of form, the stability and solidity of structure and the opposing force of transformation and renewal. Civilizations balance out their existence between the two poles of tradition and change. A resolute transformation of grounding principles of the society leads to the emergence of a new social order at the expense of destroying the old one. It is always hard to build on complete ruins. However, conservative resistance to renewal also destroys the society which loses its ability for self-regulation and regeneration.

Mastery of living lies in skillful tightroping between these two oppositions of complete destruction and complete avoidance of change. Forces that insure the stability of structure will become the topic of another theoretical exploration. The current inquiry deals with the role of contemporary art as one of instigators and indicators of change because contemporary art often performs a disinfecting function of preventing social stagnation as well as a visionary mission of dreaming about new worlds.

Thus, otherness as the core principle of contemporary art presupposes two strategies. Its critical component exposes outdated premises of current social norms exposing their incompatibility with contemporary conditions. Its visionary element creates new social layers imagining a possible world different from what it is now. Critical art can oscillate between an ironic commentary and a debunking diatribe which deconstruct ineffective mythologies, while visionary art strives to fabricate new fantasies. Both modes, the critical and the visionary, prove indispensable for culture. One should get rid of the outmoded and the ineffective to clean up the space for the new. However, perpetual deconstruction threatens to wipe out culture to the hypothetical “zero-condition” of complete emptiness and silence. We require new myths as much as we periodically feel the necessity to eliminate the old ones.

Two exhibitions that are currently installed at the Pinchuk Art Center serve as appropriate examples to the critical and the visionary modes of contemporary art. The retrospective of Arsen Savadov, composed of photos and paintings from the artists' eleven series, suggests the critical to be the main creative strategy of the artist. A similar modus operandi unifies a thematic diversity of Savadov's projects. His working method consists of colliding disparate cultural codes within the framework of one visual field.

This very unexpected and often absurd juxtaposition exposes a constructed and finite nature of the cultural schemas at work. For example, in “Collective Red, part II” (1999) Savadov diminishes claims of the Soviet system to its impenetrability and immortality by portraying participants of a typical Soviet parade with their red flags and cardboard reproductions of Soviet paraphernalia mingled with young athletic men wearing red ballerina tutus. This incongruity turns the people on the photo into a group of actors and the Soviet symbols alongside ballerina tutus into theatrical props. The implied theatricality suggests a finite nature of the Soviet ideology: its emergence also entails its demise because every theater performance has a beginning and an end. Savadov's criticality in “Collective Red, part II” exposes temporal bounderies of the ideology that issued claims to immortality.

Artworks of Olafur Eliasson, which are exhibited on other floors of the Pinchuk Art Center contemporaneously with Arsen Savadov's, exemplify the visionary mode of contemporary art. Eliasson is devoid of debunking tendencies. His projects do not criticize – they demonstrate people's openness to new myths. Eliasson's main working method which can be called sentimental minimalism stirs his viewers' emotional sphere and indicates an ever existing readiness for the imaginary world in our mental and psychic structure.

Michael Fried, an advocate of pure modernism, in his attempt to demonstrate a fallacious dissension of minimalism from its modernistic roots, best summarizes one of the core principles of a minimalist project which lies in instigating viewers' self-awareness of their physicality. [1] Minimalist objects designed by Donald Judd, Robert Morris, Carl Andre and other installation artists acting in the 1960s were supposed to be devoid of any cultural connotations, hence the simplicity of their form, so that they could serve as a point of reference for viewers' bodies rather than items of aesthetic contemplation.

Eliasson's works represent similar minimalistic spaces in which viewers are invited to observe themselves rather than to contemplate an art object. His museum environments become a trigger mechanism that activates the process of self-awareness in viewers' heads. For example, his installation “Room for One Color” 1997 represents an empty interior filled with the yellow monofrequency light which turns everyone into a monochrome entity. This type of light streaming from multiple ceiling lamps annihilates all colors except a certain hue of red which can be observed even if none of the visitors wears this hue in his or her clothing. This is actually a hue of human blood. Immersing themselves into Elliasson's yellowness visitors looking at their bare hands are able to contemplate a network of their own veins and capillaries visibly surfacing through the skin. The moment of looking at a deep structure of our bodies intrigues and frightens us at the same time because normally we can only experience a picture like that in a medical institution rather than a museum.

This very emotional component differentiates Eliasson's projects from the range of minimalist art. Eliasson is sentimental in a philosophical understanding of this term which denotes a system of knowing the world through feelings rather than reason. However, contrary to the classical sentimental paradigm which advocates a hierarchical dependence of reason to feelings, Eliasson does not construct a binary opposition from these two notions. An artist-scientist whose installations often imitate the proceedings of laboratory experiments, he attempts to combine logos and emotions in order to advance a more constructive attitude to the world.

In one of his interviews Eliasson explains: “In general we think of emotions as being rather intangible. The world at large, however, we tend to understand as for the most part being comprised of the rational and the controllable. What remains is a fluid substance from which feelings originate. To talk about emotions is an attempt to be part of this fluidity and via an act of faith entangle it with the rational, thereby allowing rational thinking to also be emotional.”

Participating in Eliasson's minimalistic installations we feel endearment and childlike joe from watching soap bubbles (“Happiness”, 2011), from a possibility of touching a rainbow (“Beauty”, 1993) or from a chance of playing with our own shadow (“Your Uncertain Shadow”, 2010). We narcissistically contemplate multiple reflections of our own image on the kaleidoscopic facets of a crystal mirror (“Your Star Hose”, 2011) or experience curiosity combined with fear in a room full of fog (Your Blind Movement, 2010).

After an epoch of intellectual cynicism which characterized a postmodern turn, Eliasson's works appear disturbingly sincere. Deconstruction as the main method of a postmodern analysis has taught us to be skeptical and distrustful. Everywhere we see systems of domination and resistance that disguise their acting mechanisms or power constructions openly or surreptitiously intruding into our lives. In this paranoid state of perpetual suspicion we come to a museum to participate in yet another demystification of yet another myth. Instead we see a garden of fountains which pulsate with wellsprings of silver drops. We smile and get embarrassed from the spontaneity of our reaction.

Why are we so afraid to look sentimental? Because we believe that we have dispelled all our stereotypes, deconstructed all ideologic edifices and archived their constituents. We have done our dirty jobs of cleaning, wiping out, removing and amputating – the jobs of intellectual janitors or surgeons depending on how we see our culture, as a dirty place or a dysfunctional organism. That is why we are so afraid to be sentimental. Because sentimentality exists only as a candid and involuntary reaction to a myth. Sentimentality is litmus paper that exposes relevant mythic constructions of the time. Serious theoretical explorations of cultural or social events should be written as melodramas because only demonstration of what makes people cry or laugh reveals the most sensitive and the most important historical knots. Eliasson does not necessarily create new myths as much as he brings to light our deep-seeded need for emotional affinity and compassion thus showing us that a place for illusions and fairy-tales can never stay empty.

The dichotomy of the critical and the visionary does not represent any binary opposition or a hierarchy of terms with antagonistic relationships. Utopian propositions about the future appear as important as scrupulous examinations of the present. We can not initiate any changes without understanding what needs to be changed. At the same time we can not remodel ourselves and the world around us without a dream, however implausible or fantastic, which delineates a possible vector of movement to the future.
Notes: 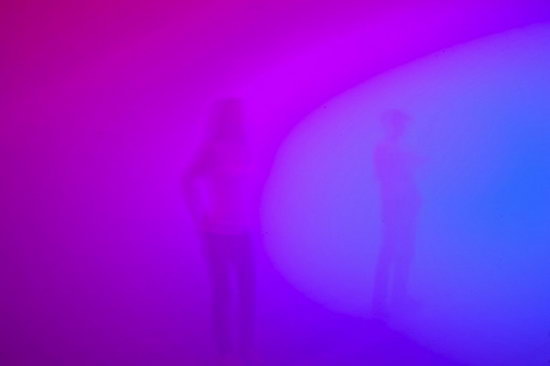 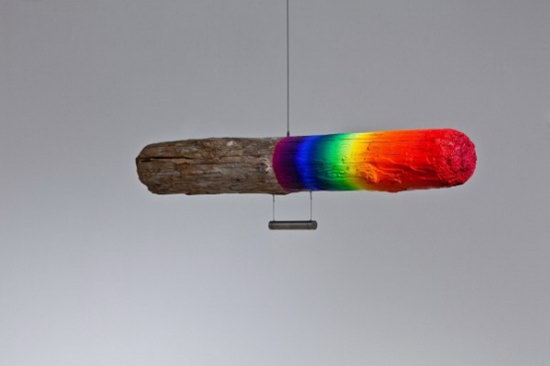 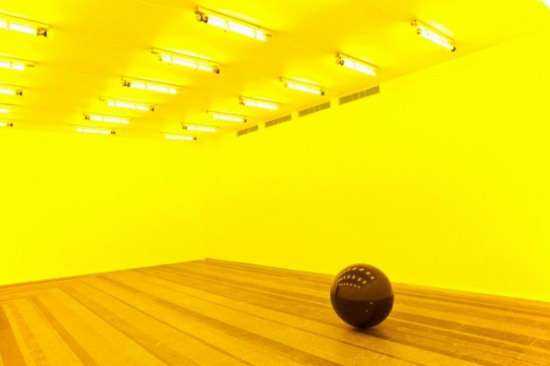 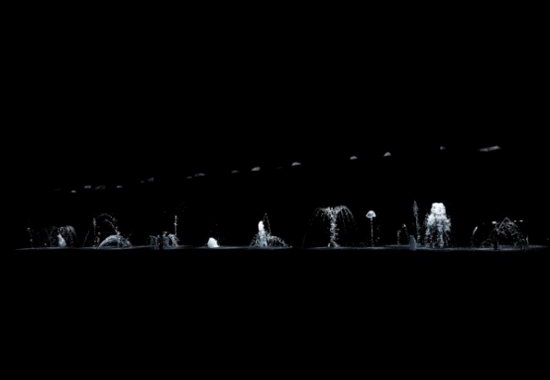 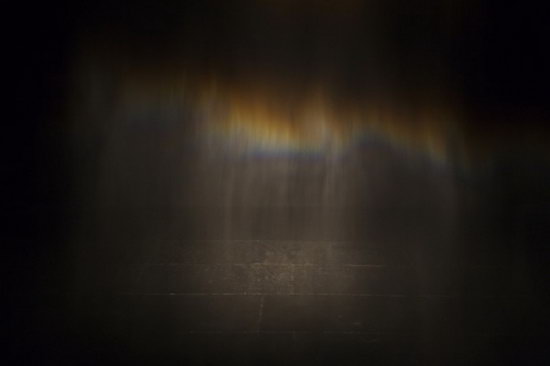 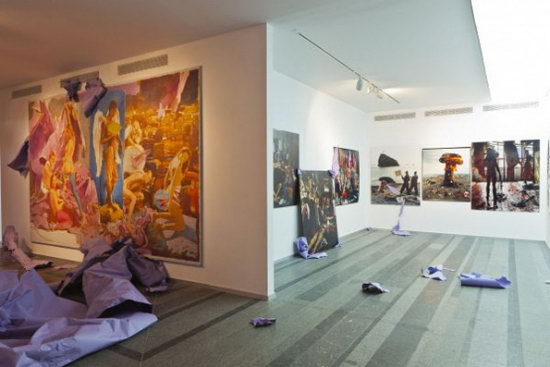 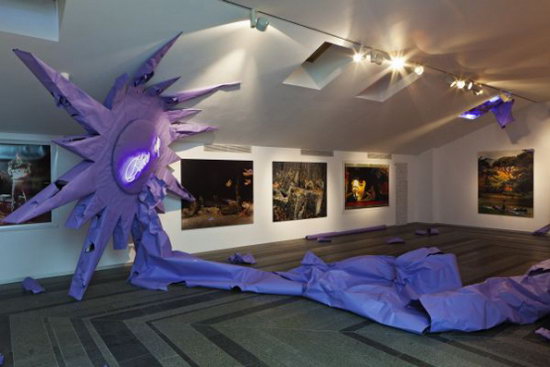