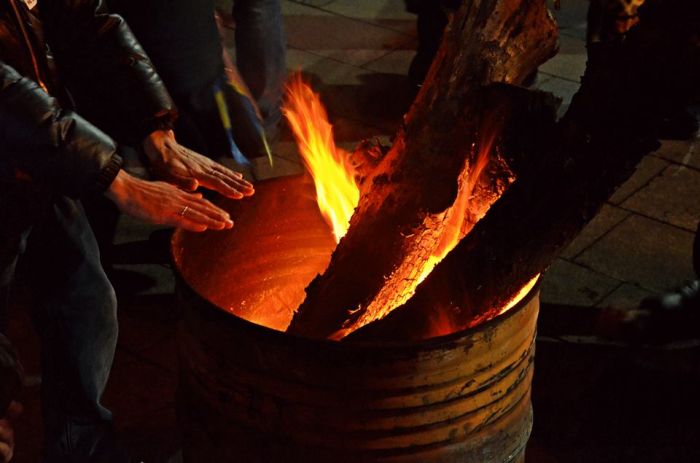 Ukraine is a country where anything is possible. The nightingales laugh and cry. The revolutions don’t even disturb the peace on the city’s most expensive street – Pasazh – with its sleek Jaguars and Bentleys, warm lights of untouched store fronts with mink coats, mannequins in Agent Provocateur knickers, and people draped in plaid blankets sipping lattes. A few steps away are barricades, a reservation of the foolhardy and blood. Now every strict mother can ask her daughter angrily: “You’ve been to Maidan, haven’t you?” People from there smell of revolutionary smoke.

The line of people waiting to see the inside of City Hall surpassed the longest line to the PinchukArtCentre in its heyday. I went inside City Hall to see why the crowd had gathered. There was no noise, no pushing. The restrained movement of the people and coughing made me think I was in church. The impression heightened when I saw the improvised altar with candles and one of the guards at the entrance silently pointed to a man’s hat. The man obediently took off his hat and entered the main hall, with its high ceilings, grand columns and stale spirit, only instead of incense there was a strong smell of sausage. The visitors silently looked around and up, as if expecting to see God’s eye on the ceiling. Guys slept on the floor, people appeared to be seeking shelter from a hurricane. One could call it that.

Maidan has become a training center where you can learn different forms of cohabitation – it’s a unique Ukrainian form of team building that, unfortunately, is practiced only once every nine years. For those on the rights it’s something like a Plast scouting camp; for those on the left it’s a true Christiania; for those who sympathize with both it’s a place of volunteerism, natural Buddhism and spontaneous creativity.

I think that in addition to rearranging the personnel department of our rotten conservatory the most important task of the EuroMaidans across the country is to transform positive social practices into daily deeds: understand, help, offer ideas, tolerate, discuss, take responsibility and most basically – don’t put your feet on the toilet, use your turn signal when you drive and vote. Believe me, this is a decent start.

I signed the latest online petition to the US government and couldn’t believe what I was doing. It’s absurd that residents of Ukraine have hope for justice and draft these electronic “cranes” and paper lanterns that burn up long before they reach space. People understand the tragicomedy of the situation yet they are still sending an SOS to a country with a black president that publicly kisses his wife and smoked weed and wrote poetry in his youth. Maybe someone standing on Maidan today making a “Glory to Reason” poster will someday come to power? After all, anything is possible in Ukraine.