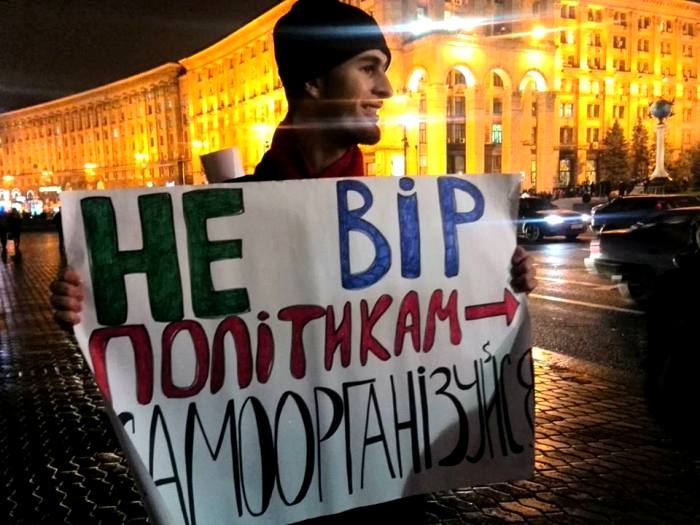 To be honest, the EuroMaidan (maidan = public square) helped pulled me out of my deep mental stupor – I again feel the blood pulsing through my temples as besides me pulses the epicenter of a major unfolding story. Nobody has the gold share of influence, making us all feel like shareholders of our own modernity. We have enough reasons to look each other in the eyes and feel the heart rhythm of those standing next to us in their own stupor.
Today, while this story still end in an ellipsis, after three days of being glued to these events I want to figure out what happened exactly and how I can use my not gold, but real share.
The revolutionary air in Kyiv is heavy with the mantra “government reset”. It sounds promising, but what meaning are those voicing it adding? I never got a response from any of the political analysts or people I spoke with on the maidan on Monday. Meaning we, those who belong (or want to belong) to the critical thinking mass of society, have to add the context.

I have to jog my memory and recall the start of the “orange” government that came to power after the Orange Revolution: non-transparency, lack of criteria for government appointments; voluntarism and arrogance after revolutionary management; inability to engage in dialogue. This mistake must be avoided right now. Signs that this might happen tomorrow are very clear: phrases so choppy the opposition is turning blue in the face saying them, bewilderment and annoyance when talking to journalists; unwillingness to work with MPs considering switching sides; radical rhetoric of the street such as “glory to the nation – death to our enemies.”

As speakers from the Maidan, such as Sashko Polozhynsky, have said, access to the “resistance HQ” will be restricted and selective. Dialogue between citizens and politicians isn’t taking shape. Meanwhile, the maidan is starting to self-organize and form mini-maidans to handle specific tasks, from security and supplies to the question of "What next?"
In other words – it's the organization of civil society and its cultural, critical and analytical aspects in this situation. Of course we need to outline our position more clearly and seek channels to communicate it to decision-making centers.

I, for one, envision the following scenario: moving from a vocal attack to “brainstorms”.

The organization of mini-maidans to consolidate work with experts in different spheres: right now among the masses there are top managers of investment and consulting companies, academics, lawyers, cultural experts, etc. They’re helping out, but going to work disappointed. Yet they have the experience and ideas needed to design a new architecture for decision-making in our country – a new country in fact, the reestablishment of which matured into the creation of meaning. What’s important is that we don’t lose each other right now.
This requires remaining on the large symbolic (and actual) maidan and moving to mini-maidans, where technical language can be spoken more decisively but without strain to draw up the agenda for the future government, including drafts of future decisions.

The result of the collective brainstorm must be broadcast via different channels to the depths of society and various communities and placed on the desks of those that tomorrow will assume high positions. Otherwise, the stale old matrix will start functioning again.

Meanwhile, the politicians urging the entire country to rise up should step at least a kilometer away from the stage and see what’s happening from the eyes of the people for whom nothing happened in these December days and who continue with their daily routines. Maybe these people are worth speaking to and understanding. And then develop a network of information (or agitation) points where consultants and volunteers can recruit them to the “national rally”. Maybe then we’ll be able to write these words without using quotation marks.

This work must be based on the principles and values of openness, tolerance, respect for different opinions, voices and creativity. After all, the Maidan began with European values. Charles Landry, who wrote a lot about creative cities, noticed that “creativity” isn’t just the ability to create new designs, but create new paradigms with which these designs are reproduced.
Under other circumstances, the revolution may lead us to finding a common language not only with each other, but with European structures that have kept their doors open but don’t want them pelted by rocks.