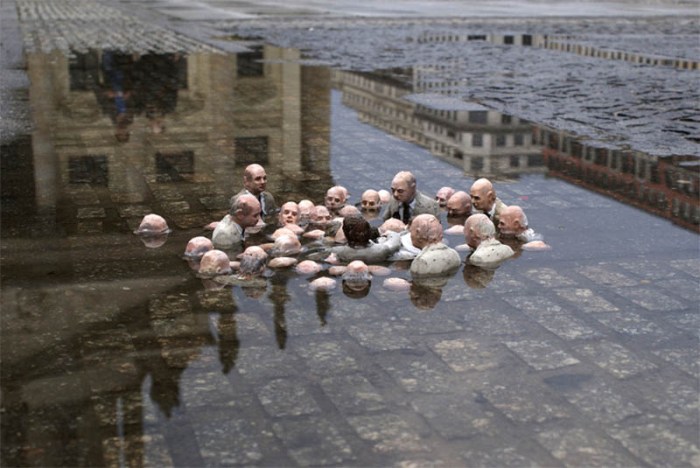 Viktoria Narizhna – translator, psychoanalyst
I think the role of the creative and intellectual elite isn’t as important during the EuroMaidan as it will be after. We already had a tactical revolutionary victory in 2004. To achieve a strategic victory we need to continue working once the turbulent revolutionary days pass. We already saw what happened if newly elected well-intentioned and inspired politicians are left uncontrolled. The creative and intellectual elite should be working so that the hundreds of thousands of people supporting the revolution in the real world and online become a huge community – an NGO willing and able to control the actions of the future government and demand that it fulfill its commitments and promises. The mechanisms and international experience exist. The world has changed dramatically – social networks and new communication tools make possible forms of public self-organization that even science fiction writers couldn’t have dreamed of. We have to take advantage of this, and this process should be initiated by the intelligentsia.

Viktor Marushchenko – photographer, teacher
The creative and intellectual community is barely present in the public space, and artists are grouped around sources of funding. There are very few intellectuals on the level of Ivan Dziuba and Myroslav Popovych who have an independent position on the state. The stars of the public space today are oligarchs, politicians and those that serve them. Culture and art are nearly absent in our lives – there is no social demand. And so there’s no sense talking about the role of the creative and intellectual community because there are no leaders, there is no influence - decisions are made individually.

Iryna, Solovey – social entrepreneur, co-founder of Bigggg Idea
Today the main role of intellectuals and new leaders is to maintain the monolithic structure of the resistance. Any actions that support the fragmentation of the body of the revolution and dissention in communities lead to overall defeat. Thinkers must understand that the success of the revolution depends on the tandem of public and political forces. I’m sure that many people in the creative community know what their role is and what they can do. Take for example Nadia Parfan who with her friends organized the open workshop “Rhythms of Resistance” on Mykhailivska Square.

The public and politicians are like two alligators fighting each other without knowing they share a stomach. We will have to digest the results together. The people, the Maidan, are the creative energy behind change. It can’t be controlled – it can only be supported by clearly outlining what’s taking place.

The artist’s main tool is the frame! So imagine, see the shadows of the revolution and with clear language emphasize the good that is trying to take place. Allow yourself to change positions and exchange new understandings of things. Pick up and adapt the creativity of the people if it expresses your feelings. But remain artists.

What makes an artist different is that he understands the future that exists and insistently constructs a future different from the existing one. Thus, in parallel with the revolutionary process there could be evolution. In the political sphere it is also important to understand that the entire revolutionary infrastructure is provided by parties. For example, the resource center in City Hall is organized by people from the Svoboda party. Appreciate this. The fact that we don’t like the current opposition leaders isn’t their fault but ours. It’s the result of our political apathy over the last five years. We can pay this debt now with endurance.

If we learn to change the government peacefully, we can do it again and again. To accomplish change we must move from revolutionary romanticism to revolutionary routine. Kyivans, such as Oleksa Man, can walk around the protest area and briefly describe what they saw and heard. We need to help create a complete and accurate picture of the events and moods.

In addition to projects to support EuroMaidan through crowdfunding, our team at Biggg Idea is thinking of ways the creative class can be the expression of the spirit of the globally pacifist Ukraine. We’re studying and selecting practices of peaceful resistance. Right now we need to work on good customization and fast implementation of attractive media interventions in Kyiv and other cities to counter violence and preserve the Peaceful Maidan.

The uprising by political prisoners in the Norilsk labor camp serves as strong inspiration for us these days. Ukraine is the focus of the global audience, being watched from San Francisco, Montreal, New York, Berlin, Novy Sad, Zagreb, Moscow, Warsaw, Paris and London. Designers can create viral communication for civic society of the world community.

Speak with your friends abroad to develop and disseminate messages in different languages. The Czech Cultural Center, for example, has already expressed its position on events in Kyiv and probably also needs a tool to connect its networks. Meet with your colleagues in other cultural centers – their position is important for Ukrainians today. Understanding all this, creators in other cities can arrange cooperation with libraries, museums and buildings of culture and turn them into information centers for public activity. This needs to be done today-yesterday, to inform people and over the course of the next week help people withstand morally.

Later these centers in cities and villages can become pillars for early elections. Of course this needs to be done without conflicts. Offices of NGOs also work. The main objective is to keep people everywhere informed of what’s really going on, not to influence them but to protect them from disinformation. People still consume the media without trust.

But without alternative sources of information they won’t be able to imagine that things can be different than what they hear on TV. In Ukraine we are fighting a masked evil that likes to distort facts, operates mostly in the dark and hates exposure. But to fight the dragon without become animals we have to protect our health and sense of humor. To quote Gus Shyan: smart humor is the best battery!

Kateryna Stukalova – art critic
When the Odesa biennale of contemporary art was held place several months ago under the slogan “Self-Government: Cultural Evolution vs. Revolution” many accused the curators that such a take on the issue was speculative and manipulative, and that the topic was abstract and divorced from reality.

Every day, when you see on Maidan the amazingly large and mature forms of civic self-organization, and spend hours discussing on Facebook and in real life the sense and prospects of revolutionary and evolutionary exit strategies, you understand that the sensitivity of contemporary art to social processes is much higher than its critics and creators assume.

Now we have to take the developments from the “laboratory” to the real political street battle. Representatives of the creative and intellectual community can take part in what’s happening on at least three levels:

1. Be another physical body among the mass of protesters, another pixel in the panorama of the Maidan – it sounds petty but it’s actually very important;
2. Take part in street agitation to reduce the amount of xenophobic and conflict rhetoric not through abstract criticism but by increasing the portion of humanistic, intellectual and paradoxical rhetoric.
3. Participate in the public debate unfolding mainly in social networks: although by inertia many consider it drainage of protest and letting off steam, it’s already clear that this is the most important intellectual work – the exchange of ideas and opinions, discussion of problems and solutions. Maybe this debate will need ten years to bear fruit, but it will some day.

And one more thing. Two weeks after the start of the protests we’re hearing notes of discouragement and disappointment over what seems to me firstly the large philosophical and moral gap between “us” on the Maidan and “them” in the offices of government and those tearing into those offices on the shoulders of protesters.

The fact that after the bloody dispersal of the Maidan, condemned by the international community and millions of protesters, our government isn’t just resigning but has the gall to completely ignore the people’s demands, creates the impression that we’re dealing with a different life form – mental and moral aliens.

Of course I don’t believe that art can become that magic yodel that caused the heads of the aliens to explode in “Mars Attacks”. But it can play the role of those microorganisms that ended the alien invasion in “War of the Worlds” – maybe not in a few weeks or months, but sooner or later this creative and intellectual virus will take effect.