Lessons from the student Maidans 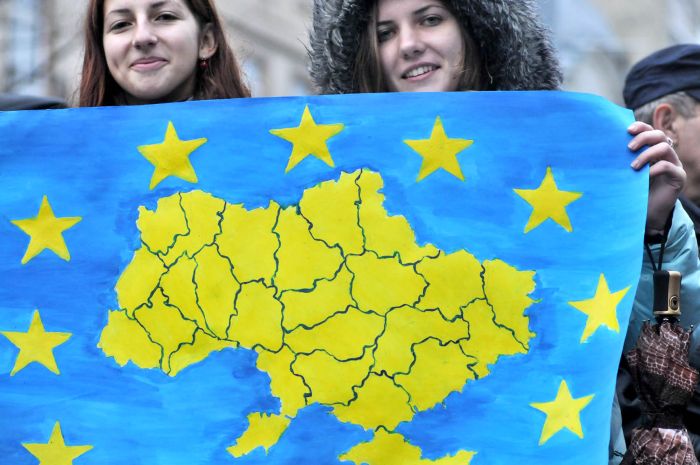 After the violent dispersal of the EuroMaidan, the main question on everyone’s mind was – what next? What no one expected was that the student self-organization of the previous week would be surprisingly helpful. The student strike demonstrated that Ukrainians could build a mass protest with a horizontal structure independent of the opposition. To some extent it also managed to distance itself from the nationalist rhetoric that would have been more than inappropriate in the context of Ukraine’s European choice. And despite noticeable flaws in the organizational process, it is safe to say that the student protests gave the Euromaidan a breath of fresh air and transformed it into a space of intellectual dialogue. Several leaders of the student movement shared with Korydor their views on this self-coordination and its importance for the future.

Students are more determined than other groups. Firstly, public opinion polls have shown that students are the staunchest supporters of European integration. Secondly, the romance of protest appeals to students. It was enough for one to start and call the rest to follow. And that’s what happened. The first protests were in Lviv, Ternopil, Ivano-Frankivsk and Uzhhorod, and then Kyiv and other cities joined.

But the students’ strength is also their weakness. Students will see the fakeness in the endless repetition of slogans like “Ukraine is Europe” and pretentious speeches and walk away. Therefore, students not only have to come up with new slogans, but play a leading role. I can imagine the disgust of Parisians in 1968 when they first heard the absurd calls to “forbid the forbidden” and “be a realist – demand the impossible.” But now the whole world proclaims them. The problem isn’t that slogans like “Glory to Ukraine – Glory to Heroes” are nationalist – they’re boring and pointless because they don’t stir any reflection. When we talk about the European Union we forget its origin – unity for the sake of peace. The bitter experience of two world wars promoted leaders to economic and political union. The European project for Ukraine is peace in many dimensions: social, economic and cultural.

Student protests need continuous activity – work in universities, agitation and most importantly – a clear plan 2-3 days in advance. The coordinators bear great responsibility. Do you end the strike? Do you continue your demands – and if so, how to you protect students from being used to incite conflicts? How do you end the strike so that people don’t go home with a sense of defeat but with plans for the start of something potentially new? Leaders are another issue – because only the student EuroMaidan has the potential to provide new faces. If the student strike gave birth to several leaders that now have the trust of hundreds and even thousands of students, then these people bear a huge responsibility. In any decision on further action they must take care of any case of pressure or repression against students for their involvement in the protest. Incidentally, such advocacy could then yield the largest benefit through the formation of various groups that will remain active after EuroMaidan. In short, repression creates dissidents.

There was only one political maidan in Ukraine and it was on European Square. The maidans in other cities were led by students and youth. Up until Tuesday the student strike in Kyiv wasn’t organized and the number of students on Maidan was low. But on Tuesday we saw new life come to Maidan when the students took to the streets en masse. The numbers were equally large on Wednesday and Thursday.

The largest movement was that of students and also people who took to the streets in their free time.

The students that were on the EuroMaidans already have European values. They are free people who demand freedom and unification with Europe. They know more or less what Europe is because they’ve studied there, trained, read foreign media.

The EuroMaidan are already being associated with the student maidans. This was the largest number of students to fill the main square of Ivano-Frankivsk since independence.

We have nothing in our favor – lack of experience, lack of resources, an adverse political situation. Today we clearly understand that the opposition doesn’t plan to make any demands and fight for them because they have one goal – the presidential elections in 2015.

What we need now is to strengthen our organization and make our demands to all the political elite.

Bohdan Biletsky – activist of the Direct Action student union, coordinator of the left block on EuropMaidan

The organizers of the student strike were right in saying that there shouldn’t be any slogans not related to Europe. But the problem is that in their opinion the shout “Who’s not jumping is a Moskovite” is related. But tolerance, not exclusion, is a European value. Tolerance is the most lacking on Maidan. When activists from Direct Action were promoting slogans that actually relate to European choice, the organizers opposed.

But this is not a reason to stay away from EuroMaidan because the key difference with the Orange Revolution is that it was mostly self-organized. We must remember that everything we call the good life in Europe was achieved through strikes and protests, organizations and debates. To learn from the European experience is to learn the experience of self-organization, and then there will be some sense to the EuroMaidan. It’s good that students were able to self-organize and the coordinators were able to bring 10-15,000 people onto the Maidan. It speaks of the politicization and organization of people, but it lacks a social element. What brought these thousands of people out was mostly formal, and based on the myth of a beautiful Europe. But I hope that the people that organized the protest will build a network and maintain contact, and then they will be able to rally students to protect their interests. It is a very important experience of protest for all of us.