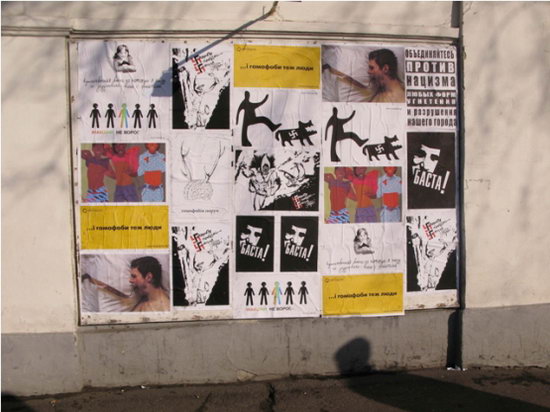 The word “when” in this title is not very appropriate – art always, although indirectly, talks about nationalism and other dominant ideologies, while the theory – history, philosophy – is not ready to notice these metaphorical discourses. However, in Summer 2010, art began to talk about nationalism quite specifically, by means of analytical conversation – when a unique debate between two Ukrainian artists, Taras Polataiko and Nikita Kadan, flared up on KORYDOR.

If different areas of humanitarian discourse in our country were once more closely intertwined, Ukrainian researchers of nationalism must have definitely paid attention to it. However, while there is a huge gap between contemporary art and the humanities, which according to the accurate observation of Artur Zmijewski is caused by the specificity of artistic figurative language which does not meet the rhetorical device of other ways to study reality, I will try to build a bridge to the theory and analyze the debate, which I consider to be not only valuable and unique but also significant in the Ukrainian context.

Since the cause of this dispute was the phenomenon of nationalism and the ways it is interpreted in artistic discourse (reinforced by considerable personal bullying and suspicions, which added to the piquancy), I watched the dialogue with interest, as I have just recently defended my thesis that is partially dedicated to the transformation of nationalist ideology in contemporary Ukraine. In general terms, the points of view expressed in the discussion by Kadan-Polataiko demonstrate the characteristics of the formation and the main vectors of this ideology, and simultaneously the superficiality and lack of understanding of the structural factors of social processes. In summary, the artists appear to be unable to look further than their own personal experiences.

For readers who are less “into the subject”, remember that for some time in our country’s science the primary line of debate lay behind the divide of “primordialism” – “constructivism”. Supporters of the “primordialist” approach emphasize the uniqueness of the nation and its historical (timeless) continuity and tradition, and argue that nations exist forever and are the basis for the further processes and events. This is the logic of “popular science” theories, which draw the family tree of Ukrainians as coming from Aryans or Trypillians and are involved in finding the “national soul.” From the point of view of the “constructivists”, a nation is a moving formation that depends on specific political and historical circumstances.

Supporters of this theory point to the importance of the creation (by intellectuals) of a new identity and voluntary (or imposed) self-identification (of masses) during a nation’s formation in times of modernity, which is directly related to the development of capitalism. The experiences of different communities in this process of modernization of ethnic life (transition from the localized regional groups to a homogeneous nation within one state) are very different. Depending on the conceptual basis from which the idea of a nation is to be constructed, “political” and “cultural” nationalism should be distinguished from one another– the “political” positions the nation as a collective of all the state’s citizens who share common rights and obligations, while the “cultural” or “ethnic” one stems from the ideology of blood kinship, common background, language and culture.

Examples of “political” nations are France and particularly the U.S., which is the basis for the consolidation of political processes that helped to reconcile cultural diversity; examples of “cultural” nations are Germany and Eastern European countries. Some researchers, such as Liah Greenfeld for example, put forward the theory of resentment as a basis of a nation’s formation in our geopolitical space. In her opinion, Eastern European states that did not have their own great-power status in the second half of the nineteenth century but were part of large empires, could not realize the “western” ideology” of a political nation due to their inability to create their own state within ethnic boundaries.

Awareness of this inability by regional elites caused the borrowing of “Western” nationalism, but with it came the change of its essence through ressentiment – the complexities of the formation of a political public community resulted in the promotion of ideologies of blood kinship and ethnic exclusivity. It is necessary to return to the myth of the “golden age,” which is the formation of “implicated”, communities of “secret fraternity”, whose identity was built in opposition to the
Other (which describes the Polish, Ukrainian and Jewish nationalism in the Austrian Lviv).

However, this theory has the significant drawback of a peculiar “orientalism”, a habit to treat non-Western experience as minor, based on borrowings, and not as a unique one. John Hutchinson corrects this defect, indicating that under the conditions of ethnic communities’ existence within an empire (which itself tried to build a national political project), stateless ethnic groups had no other choice but to develop their own identity, using the rhetoric of cultural nationalism.

What relationship does all the above-mentioned have with the current Ukrainian situation, and in relation to the discussion of Kadan-Polataiko in particular? In this dialogue we can see the opposition of political and cultural nationalism. (To fully understand some rhetorical turning points we should also mention the consistent marking of the concepts “nationalism” and “nationalist” in the Soviet Union.) Nikita Kadan definitely treats everything with a “national” root negatively (“In front Polataiko is mincing with the book – but behind him a real nationalist with a bludgeon is walking with long strides”). And at the same time, he is talking about the politics of inclusion, resistance to various types of xenophobia, and people’s fight against powerful elites. He outlines the basic tropes of the “political nation” – the community of citizens with equal rights and responsibilities, rather than proximity of blood relation. Few people know that it is this ideology that was developed as a state national policy during the presidency of Viktor Yushchenko by specialized research institutes, and now the situation has hardly changed. After all, in a polyethnic state like Ukraine, with different historical and cultural experiences in its numerous regions, anything else is simply impossible.

However, Kadan only sees the manifestations of the ethnic and predominantly Ukrainian nationalism in the public field, which of course have been amusing us for a while with brilliant speeches by Irina Farion, the kitsch portraits of Stepan Bandera, and the “hunt for perverts” from the ultra-rights. (To be fair, let’s also add to this zoo the deputy of the Odesa City Council Igor Markov, the leader of the “Rodina”party who with the help of local professional sportsmen ). Instead, Polataiko is primarily concerned with the Ukrainian cultural identity, which has already suffered for several centuries from the imperial politics of its neighboring country, and suspects the young leftists in the conjuncture because of insufficient, in his understanding, exposure to Russian attacks.

I myself cannot identify with either of these positions. Both of them seem to be equally promising to me, but at the same time symmetrically short-sighted, focused on the present moment (what is also typical for the project Rael Artel from which, actually, this discussion started). To reveal the hollowness of national projects, consolidating the dynamics of the “enemy image” is as important as demonstrating power imbalances and cultural discriminations. However, the nation is a process – and I would prefer to construct this kind of conversation not with words, but with works in which nationalism would have been considered as a historical phenomenon, and not as good or evil.

Looking at the global future, I really wonder how a new national debate would develop – taking into account the current cross-cultural tension in the old Europe (a ban on the construction of minarets in Switzerland and wearing the hijab in French educational institutions) with the simultaneous reduction of state sovereignty under the pressure of transnational corporations and the global circulation of capital. If we remember that the modern nation-state emerged simultaneously with the development of the new production method, which was in dire need of a homogeneous culture capable of forming atomized, mobile and interchangeable individuals, which is an ideal labor force (hence the importance of language and culture in national projects as components of the coordinated communication system), what are the national and cultural ideologies born by a neoliberal economy today, which already has plenty of limitations and requires a new, global homogeneity? How will the Ukrainians look one hundred years from now? The same as the Irish in the mythical movies? This prospect sets a new dynamic – the Westernized breath of mass culture erases cultural diversity better than the national policy of imperial Russia.

For us the social justice Kadan advocates for is really the important key. But does our cultural uniqueness, which Polataiko refers to, really matter? For some reason when it comes to justice, it is seen as a process, a struggle, but when talking about identity, culture – they are like pre-made congealed clots. But cultural uniqueness is no less a procedural phenomenon than social justice saturated by the power imbalances including an uncertain end result, as well. Do we need to ask this question from the leftist position or give it to the right as the “opium of the people”?

I am finishing these lines in Lviv. Yesterday, on the municipal bus, I admired the big calendar for 2011, designed with elements of history and precepts of the Ukrainian Nationalists. But there have also been bright and massive flash mobs of “Hardbassers” – a new youth subculture that emerged at the end of 2010 in the former Soviet Union as an ironic banter about Gopniks. It is comedic street dance with the rhetoric of a healthy lifestyle with carnival-like aesthetics, spreading through internet communication and social networks. What is being produced here is something totally new and unexpected, and now the masses reveal (not a sentimental-violet!) the uniqueness of our space.

So to the debate about nationalism I add a question mark and an ellipsis, giving tribute to both political and cultural poles, and sincerely wishing that the views of artists during such important historical processes, such as the formation of the nation, relied on a broad theoretical and historical framework, analysis of the current situation and look into the future – otherwise the conversation is being held between people with their heads buried in the sand.