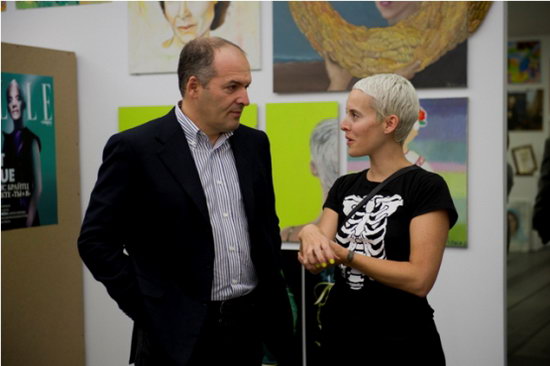 Following a wave of accusations of ignoring Ukrainian art, PinchukArtCentre (PAC) can finally boast of a project with a stratospheric number of examples of local creative potential. As part of the new exhibition “You+I”, South African artist Candice Breitz proposed that Ukrainian artists (or people who consider themselves such) make a portrait of her for a collective exhibition at PAC. In just a few weeks, several rooms in the Centre were filled top to bottom with works. You can’t help but rejoice at the level of participation and openness to cooperation from the artistic segment of the population. But at the same time it makes you wonder – is this event for many their only opportunity to exhibit their works, bypassing the subjective “market-based” laws of galleries?

Many youth Ukrainian artists still think the only way to realize themselves creatively is by working with galleries. In Ukraine, the number of galleries willing to work with young artists “from scratch” doesn’t stir the imagination. The alternative, which exists only on paper, is state organizations such as the Artists Union - feeble rudiments once established and justified by the Soviet system of state support that can’t attract new members and only alienates existing ones. The so-called institutional career path for the majority of creative youth remains terra incognita, requiring explanation on the level of an anti-illiteracy campaign.

The opportunity to display one’s work in the most visited exhibition space was more attractive. This desire only hardened under the influence of Candice Breitz’s charm, which she sincerely and generously exuded at meetings with Ukrainian artists ahead of the exhibition

In the end, the project with the very compelling name “You+I” not only offered the viewer hundreds of interpretations of the artist’s image, but also a snapshot of young Ukrainian art (or at least those that seek to reach this chimerical level). Most of the works, it seems, came from art students and youth who haven’t taken any art lessons. Let’s recall that a professional education or experience wasn’t mandatory. Education even became an obstacle. At least one of the students from the Art Academy that brought an academic sort of portrait of Breitz to PAC was rejected by the girls at the “drop-off point”.

What can I say, it’s difficult to associate the study of painting with the cherished category of contemporary. However, the project “You+I” in no way aimed to criticize or assess our art situation, but simply wanted to objectively define the range of young artists of a country little known on the global art map. That’s why during a conversation with students at the Academy, Candice Breitz emphasized that there are no style, genre, technical or other restrictions to their expression.

You can be certain that the artist’s appeal was heard. With every week (works were accepted even after the official opening) the halls looked more diverse – paintings of different formats and skill levels, graphics, numerous photos, hand-written lyrics resembling school love poems, a video of Alevtina Kakhidze’s wonderful performance, a witty piece (bag of candies) by Oleksiy Sai, who is so eager to be assigned the most talked about term in art critic circles lately – “conceptual”. The portraits are literal, metaphorical, symbolic. The artist, who asked everyone to portray her as they saw her, should be satisfied, though the visions of some authors were excessively specific and individualistic. Perhaps it’s my subjective disbelief in the young so-called abstractionists of our day talking, but the work with the pink and green squares in the spirit of “an early Victor Vasarely” seems like something that waited a long time inside an unknown op-art adept’s barn until the opportunity arose to turn it into portraiture.

An interesting work found a place for itself beyond the main exhibition halls. Artist Maria Pavlenko drew Candice Breitz’s hands and head in the mirror-filled restrooms. How is this not site-specific? Let’s take a lyrical step back and leaf through the history of PAC: during at least its first two projects, the Centre’s restrooms were considered the people’s choice among those who were first to stand in line by Bessarabka Market to see contemporary world art. Ironically, over time these masterpieces of industrial design became a full-fledged part of the project space.

Overall, Candice’s exhibition is interesting, clear and very diverse, at times excessively – the public should like that. There are many details that warrant a closer looks, a dose of healthy humor and a hint of provocation that is traditionally associated with the trendy label “contemporary art”. Here I would like to note that PAC’s target audience has become if not more knowledgeable, then at least far more open and tolerant of this phenomenon that until recently was considered the enemy. The first meetings as part of the newly launched course on contemporary art by “Cultural Project” noted a slight qualitative and quantitative shift in the audience’s attitude towards cultural issues. The lay public no longer seems as lost and confused when it comes to spectacles, socially critical gestures, political discourse and other Groyses. People still seek advice (almost practical) how to perceive and understand the wonders presented by PAC as the most contemporary of world art. Although they have given up asking why a dead shark is called a work of art. The glory of Hirst’s exhibit didn’t last long; nothing is eternal.

For the art community and “progressive” viewers, Candice Beitz’s project should be an interesting panorama of Ukrainian art that you won’t even find in special youth-oriented projects such as MUHi. I’m not sure whether it’s to the benefit of artists or gallerists, but they won’t judge an artist solidly based on one work. Even so, the vast majority of works exhibited don’t mention the author, unless they surmised to leave their signature on the front side of the work. But that was the essence of this project. What's more, selected works will continue to travel namelessly with Candice Beitz to museums and cities around the world. “You+I” got its start in Ukraine and in the future, Ukrainian artists will be accompanied by colleagues from other cities-countries-continents and they will all remain anonymous authors of a piece of gesamtkunstwerk mosaic by a South African artist.

Given the earlier mentioned thrill of our artists to be exhibited most of all, it would be interesting to learn their opinion about the future of their works. Would they want them to be part of Candice Breitz’s permanent collection, and how bothered are they by the disregard of copyright for the sake of the idea?

Ivanka-Kate Yakovyna, a young designer and photographer, considers it a challenge to implement an idea perfectly in a short period of time that doesn’t just meet Candice Breitz’s expectations but also her own. If you’re going to join the project, do so wisely, and make something more than just a portrait. “I’m interested in my work being part of this cross-section of Ukrainian art that everyone is talking about. And it doesn’t matter if it’s written in capital letters that this is my work, or it’s not signed anywhere. I understand the essence of the project, and it won’t change if the works are signed or not,” commented the artist. “And I will acquire a name, it’s not important in what field, in other ways. Participation was important for me in this particular project,” she added ambitiously.

Graphic artist Iryna Kostyshyna thinks the value of Candice Breitz portrait idea is the opportunity for interaction between two artists, “two closed systems” that start to interact. The fact that one system is later absorbed by the other is another matter. “It’s difficult to talk about copyright in general and in the context of this project. I can’t comment immediately. I don’t care about the signature because people don’t know me outside Ukraine anyway. I’d be more concerned with how well the exhibition featuring my work will be organized.”

The author of another portrait shares a similar opinion. Granted, the motivation behind their participation was diametrically different. Future art critic Olena Nedilko doesn’t recognize any creative practices of the 20th century and believes everything called modern art is a profanation. Olena considers her work featuring an image of a woman’s face framed by a black ribbon on a red background as mourning for art. “The fact that the result of one amateur person’s “mental process” one night was accepted for an exhibition and even admired proves once again that there is no meaning to contemporary art.” The fact that Olena, whether she wants to or not, thinks conceptually (there’s no escaping the word) and creates an art product, doesn’t change anything for the girl. “One creation won’t raise me to the ranks of an artist. If it’s exhibited in other countries, I don’t think someone will decipher my message. What’s most important is that I affirmed my position.”

All we have left is to hope that every participant in the project received personal satisfaction from the new artistic experience. And it’s not worth analyzing whether this satisfaction simply flatters professional pride (rumor has it that some artists have already added “exhibition at PAC” to their resume) or whether it is the joy of understanding one’s audience and oneself.

The author is grateful to Alina Sandulyan and Olena Homyreva for help in preparing this piece.