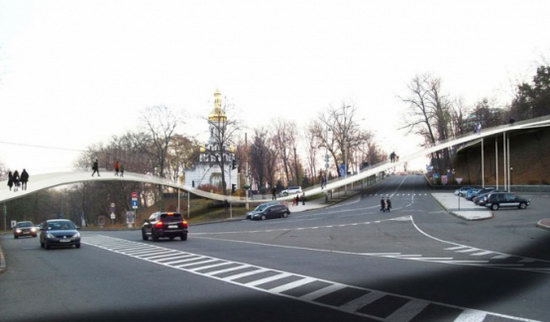 In late April, a festival was held at the Kyiv House of Architects with the optimistic name Canactions, aimed at “cultivating a deeper understanding of contemporary architecture in Ukraine.” This is the fourth such festival, but unlike previous years, this year there was a very specific practical connection: over three days, the results of a competition for the best urban landscape designs of the central parts of Kyiv for Euro 2012 would be announced.

Urban landscape is an extremely painful subject for most people in Kyiv. Can the competition announced by the Kyiv City State Administration (KCSA) and the Kyiv Central Agency for Urban Planning, Architecture and Urban Design solve the city’s problems of dilapidated Soviet infrastructure crushed by banana capitalism? The presentation of the best projects of the International Competition for Urban Landscape Design of the Central Part of Kyiv for Euro-2012 and Distant Future took up most of the second day of the festival.

The competition participants were asked to create designs for the development of central Kyiv – the Dnipro River embankment, Kyiv Dytynets, Peyzazhna Alley, Kontraktova, Poshtova and European Squares, Andriyivsky Descent and Khreshchatyk Street. The designs must be eco-friendly, respect the city and future generations, and bear in mind European integration. The designs must consolidate the efforts of authorities, professionals and the general public and create a precedent of transparent and effective collaboration when solving the city’s problems. These problems weren’t specified in the competition announcement, requiring the architects to identify them based on the plans posted on the Urban Landscaping in Kyiv for Euro-2012 website and their own observations.

Of the 48 projects submitted, the jury, which included six European architects, the head of the KCSA Oleksandr Popov and the city’s chief architect Serhiy Tselovalnik, selected nine finalists. When asked to comment on the lack of short-listed Ukrainian projects, the festival organizers said that the jury’s selection reflects the objective reality – the projects submitted by Ukrainians were much weaker than the foreign submissions.

Avoiding such problematic topics as conservation of architectural heritage, litter and preponderance of kiosks, the finalists focused on improving parks and the riverfront. The British team from FORM Associates proposed placing a stake on Kyiv’s blue-green, river-park DNA. They think the highway separating the hills from the Dnipro should be covered by a canopy, allowing the parks to extend across its roof all the way to the water. Along the hillsides the architects proposed creating pedestrian promenades dotted with special lighting and information boards that won’t obstruct the landscape. This project pleasantly surprised me with its realism: understanding that it’s not realistic to solve infrastructure problems with less than a year to Euro 2012, FORM Associates proposed an original idea for the visual transformation of the city center.

Greenhouses in the Kyiv subway gave the Brits the idea to send flower seeds in order to help Kyiv architects create large botanical installations. And while these installations don’t solve the city’s main infrastructure problems, they at least meet the competition requirement to collaborate with the public. Perhaps this could be a good way to show that people can decorate public space not just by rebuilding their balconies.

Russians Mikhail Beilin and Daniil Nikishin of THE_CITIZENSTUDIO, who also worked on designs for the Perm Museum of Contemporary Art, suggested a strategy of minimal intervention. In their opinion, the green hills of Kyiv don’t need any new massive structures, instead they should be adorned by a network of wooden walkways, bridges, arbors and info-stands. The key element of their concept, in my opinion, was the reinforcement of the truncated hill by St. Andrew’s Church. But won’t the influential owners of the Museum of Spiritual Treasures be against them filling in the hillside as it will cut off one of the entrances to the underground garage?

Jason Hilgefort of the Dutch studio MAXWAN proposed a concept of a green Kyiv. His project, 23 Parks, would enrich the parks along the Dnipro, which currently have no more than six types of trees, by introducing other types of flora. Expanding on this idea, Hilgefort even suggested populating the parks with plants from Ukraine’s Red Book of endangered species.

I wonder how this phyto-idea will be received by Kyivzelenbud, which despite all the political metamorphoses of the last thirty years, resolutely plants tulips and marigolds. To address the inaccessibility of Trukhaniv Island, Hilgefort suggested building an aerial cableway that would connect the island to the right bank and extend all the way to the botanical garden.

Designer Philip Pishchik, also known as BLUEMOLOKO, supported the idea of an aerial cableway connecting the two banks. He proposed solving the traffic problem by introducing river taxis and connecting Volodymyr’s Hill and Mariyinsky Park with a bridge for pedestrians, cyclists and Segways. Euro 2012 guests can be housed in mobile hotels on Trukhaniv Island, and a sandy beach peninsula can be made under the metro bridge tower. Philip’s project was the only one among the finalists that addressed the problem of the onslaught of billboards.

Judging from the applause, the public liked most the pedestrian-cyclist rings on European Square designed by PLAY from Japan. Team member Ken Aoki said that if the plan is approved by late May, the bridge will be ready by early summer 2012. After Ken’s presentation, he was surrounded by enthusiastic students asking him to disclose the secret of this amazing software.

During lunch on day three the organizers asked the finalists to come on stage for the awards ceremony. The Urban Landscaping in Kyiv competition was won by the Colombian team from Taller 301.Their idea is to create wave-like landbridges that by covering the highway along the Dnipro will connect the parks and the river, turning the embankment into a vast recreational zone. When accepting the prize, the Colombians stressed that they understand that their idea is quite ambitious, but it’s exactly these kinds of ambitious projects that give new impetus to urban development.

Against the backdrop of the overall organization of the festival, the awards ceremony appeared quite comical: before getting a nice framed certificate, the architects had to listen to the jury feedback, obviously not intended for the public. To improve the situation, chief architect Tselovalnik assured the “young and creative” participants that all their ideas will in one way or another be adopted in the strategy for the development of a new Kyiv. But for some reason the finalists weren’t very impressed. Tselovalnik also assured the architects that this competition won’t remain ink on paper: the Kyiv government promised to look for ways to get the projects off the ground given the unique opportunity presented by Euro 2012. Ihor Dobrutsky, head of the NGO “Capital Initiatives” supported Tselovalnikin’s resolve and promised to hold a tender for investments in these projects in May.

It would seem like the championship was positive: the competition was held, the results were announced in the presence of representatives of the general public, the winners were international, the government promised support. But it’s not quite clear why investors should be interested in investing in the improvement of public space and how with just a year remaining until Euro 2012 to do well what hasn’t been done for the past twenty years. Do we truly believe that there will be bike lanes, that the traffic jams, ubiquitous kiosks and billboards will disappear, that they will stop cutting down parks and demolishing old estates? One would like to…