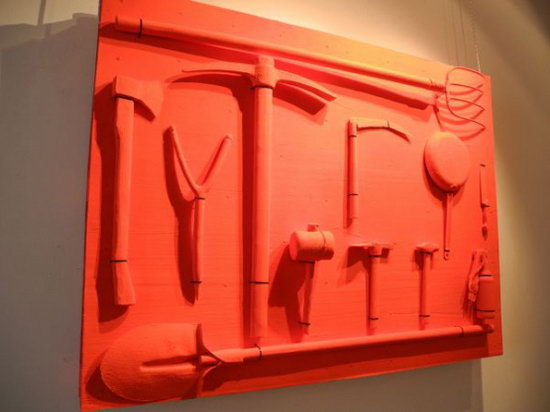 “I know not with what weapons World War III will be fought, but World War IV will be fought with sticks and stones,” Albert Einstein once said. And if you believe Subcomandante Marcos, the “icon” of the anti-globalization movement, the Fourth World War has already begun. This is a war between “mere mortals” and global capital, or Power in all its manifestations. Don’t believe it? Then why didn’t you visit the Mala Galereya (Small Gallery) of Art Arsenal to see Volodymyr Kuznetsov’s exhibition “Renewable Weapon”? Judging from the exhibition, the famous physicist and the no less famous partisan were right.

Throwing aside his brushes, Kuznetsov takes hold of an ax. No, not with the goal of killing the old extortionist, but to carve out a good dozen slingshots. It seems he wants to arm all the oppressed and disenfranchised, give them tools of resistance. This is a primitive weapon for men and women, big and tiny, slingshots for children and adults. There are also cobblestones, forks, knives and hammers – it’s all next to us. Take them and use them! Let there be revolt!

Let’s be honest – the Kyiv audience has already grown accustomed to the socially critical exhibitions of members of the artist group R.E.P. All the same, “Renewable Weapon” is something new. Instead of intelligent reflection, we see an almost propagandistic project. Instructions for action. And the difference is quite simple to explain – the times have changed. The social context has changed.

Why exhibit weapons? This is a rhetorical question. The remnants of a welfare state are being dismantled before our eyes, while the arbitrariness of those in power oversteps all bounds. We no longer wait for good news from the TV. Life has become harder and sadder. In 2008, before the economic crisis, protest was a matter for marginalized groups, but today it’s a welcome guest in every home. And, importantly, now the artist’s hands are untied. He no longer has to justify a radical gesture. Resistance means resistance. It’s simple and clear to everyone. What’s there to explain?

Kuznetsov expresses an obsessive collective desire to get rid of injustice, in any way, even “senseless and ruthless”. It’s not about revolutionism or revolution, it’s about the desire to revolt. It’s a fair and somewhat infantile desire to find simple answers to complex questions. A revolt from despair, without a positive program, without “for” and “against”. Punish the guilty, defend your personal dignity – that is the secret desire of the silent majority. As Albert Camus said: “Revolution starts with an idea, while revolt is the result of individual experience.” So, by bringing weapons into a gallery, Kuznetsov is talking about revolt - existential, personal and even somewhat intimate.

People indeed want to revolt. To understand this, all you have to do is ride public transport or go to the market on Saturday. People aren’t just criticizing the authorities, they genuinely hate them. Something small like a broken elevator button or sour soup is enough for the average Ukrainian to publicly berate the regime. The stories of the people on the screen - overheard on the streets, in trains, gathered from conversations - capture the status quo. This is our reality: brutal, cynical and unfair.

Yes, there are problems: poverty, corruption, lawlessness. Tons of problems. But this isn’t news. There are millions of stories about this in the papers every day. What next? We are offered a solution: move to action - get weapons.

“But this is aestheticization of violence!” an infuriated old intellectual will say. Actually, whether to resort to violence or not is a question as old as the world, one that arose before nearly every generation of radical social critics. A thousand spears were broken debating this issue, starting from the times of Dostoevsky and his childish tears. Let’s see what form of violence we face.

We associate a slingshot more with childhood pranks than with massacre. Today these toys are becoming real weapons of political action. In Europe, with its rich tradition of protest, there is an unspoken understanding: protestors don’t take firearms to protests and police don’t press criminal charges against those detained. And, strangely enough, this rule works. Paradoxically, in our time, when the production of guns for murder has reached unprecedented heights, a group of men armed with slingshots and sticks is much more effective than a squad of machine gunners. It’s violence without violence. Gandhi would be pleased.

Let’s return to Einstein. The old guy wasn’t mistaken! Today’s clashes between protesters and police are becoming more reminiscent of medieval battles. One of the elements of the exhibition - a photo chronicle of a labor strike at a South Korean factory - is a testament to this. Having barricaded themselves on the roof, the workers fight back against the police with gigantic stationary slingshots. And what do the police do? They line up in phalanx formation and prepare to storm. They hold a strange type of shield in order to protect themselves from the hail of “shells”…Catapults, battering rams, buckets of tar or a moat would look no less organic here. From these photographs you can re-paint the classic painting “The Siege of Constantinople”. It is this phenomenon that interests Kuznetsov.

Bloody rebellions are becoming a thing of the past, leaving space for media games and public confrontation. To highlight this once again, the artist includes in the exhibition a stand that says “In case of fire”. Instead of the typical fire extinguishers and buckets, the red board exhibits more traditional folk weapons: forks, sickles, knives and hammers. When revolts broke out in the past, people grabbed for them first. They were used to fuel fires, not put them out. That was then, this is now. The objects are tightly bolted to the stand and it’s impossible to remove them (and why would you?). Kuznetsov suggests that we see them as history, as a visual reminder of turbulent events of the past, limited to only critical analogy with the present. He hands over the murder weapon….to the museum. Now it’s a museum piece.

“For many this is a serious question – whether to take up armed rebellion or use other methods of struggle, not as bloody, but purposeful, confident in their rightness and faith in victory,” Kuznetsov stresses without pathos, and in anarchistic fashion adds: “It is a rejection of all manifestations of power…It’s the sharing of the best life experiences with others like you.”

How do you do without classics, without the cobblestones – the anthemed “weapon of the proletariat”? The artist only benefited by adding cobblestones to the exhibition because cobblestones are the first thing that comes to mind when you imagine popular protest. Kuznetsov installed an enlarged version of Ivan Shandra’s statue of a worker along with a large stone near the entrance to the Cabinet of Ministers. So that they’re afraid. So that they don’t forget.

There are real cobblestones integrated into the gallery space. They are exhibited on the background of the streets from where they were taken. The viewer is told directly: “Open your eyes, the weapon is nearby, and I even know where it lies. It’s under your feet. You don’t need a license for it, just bend down and take it.”

And here’s where the fun begins. There is nobody to take this weapon. Who is going to bend down for cobblestones? Kuznetsov doesn’t answer this question, just like leading political analysts and experienced activists can’t answer this question. Meanwhile, the cobblestones lie idly and perform their direct function – to become a road. Meanwhile, a copy of Shandra’s sculpture is peacefully hidden in a quiet square in Podil, serving as decoration for family strolls.

We see reason to protest – “a book of complaints”, we see tools – “renewable weapons.” But there is no subject. Even the photographs from far way Korea serve as a rather obvious exotic example in our local context. You can understand the artist’s attempt to speed up the process, to make the wish reality. You can give him credit for his courage of expression. But now he has to wait together with everyone else. In the spirit of Dali, this exhibition could have been rightfully called “Premonition of Civil War”.

Ok, enough complaining about our “miserable” reality and public apathy. After all, it’s not as miserable as it seems at first glance. And the premonition mentioned above, the premonition of something new and better isn’t unreasonable. Because even at vernissages these days you are more likely to hear conversations about Zizek, Bourdieu and trade unions than brand name clothing. It’s a new quality of relations, and it means that change is underway. 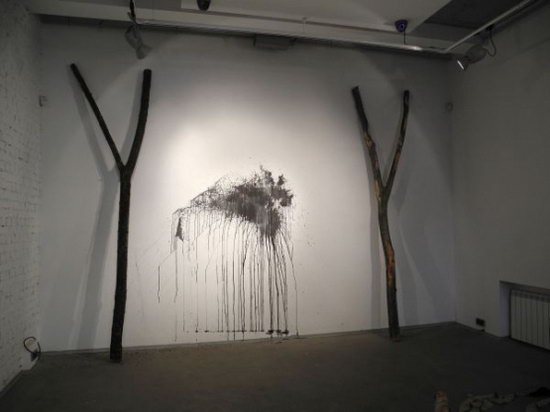 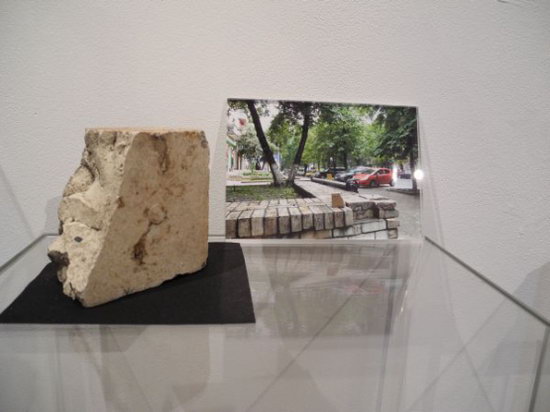 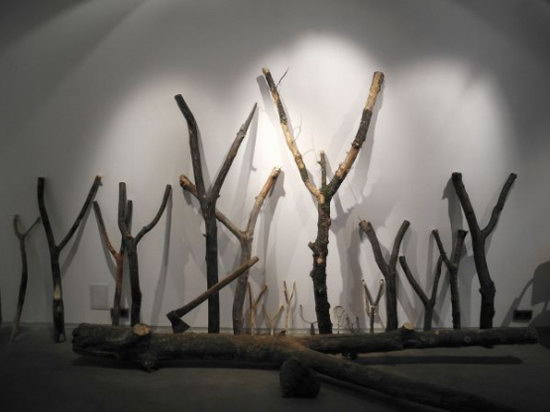