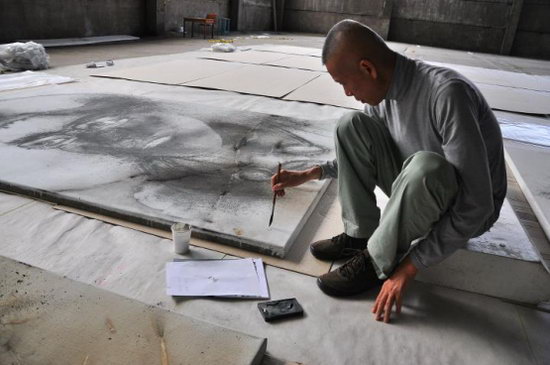 Just under a year has passed since “Izolyatsia. Platform for Cultural Initiatives” announced its existence. The institution opened in the city of Donetsk in late September 2010 with Adam Nankervis’s project “Izolyatsia 2.0” and the conference “Cultural Conversion: the new life of the industrial past.” Already then the project was impressive by its scale and ambition, even a bit intimidating and deliberately artificial given that its location isn’t exactly rich in cultural initiatives.

All year I carefully followed the foundation’s projects and regularly visited everything that was presented to the audience. I even managed to take part in their educational program, and each time was pleasantly surprised by the quality of the events. The Izolyatsia team has been very consistent in reaching all their stated program goals. Everything they do is so correct that one gets the suspicion that they’re following a well-crafted textbook only they know about on how to smoothly and properly operate an art institution. Everything is savvy, clear, timely, stylish, with a sense of moderation and – careful, death defying act! – with a very reverent and pious attitude towards their viewers/listeners.

At first glance (though the effect is the same the second, third, fourth and all subsequent times), Izolyatsia seems like some otherworldly creation, an analogue of which you won’t find anywhere in Ukraine. Judge for yourself: the founding patron that spares no expenses for the institution’s projects and isn’t looking to make money from them; a local team of intelligent and forward-thinking cultural managers; English architects concerned with preserving the image of the former industrial facility; a development strategy that includes an environmental component and is focused on revitalizing the local community; hot-eyed guides passionate about what they’re telling you. These are just a few of the aspects that lead to the unambiguous approval. But understanding and taking it all for granted, you don’t stop looking for the hidden catch.

And you do find it – not in the work of the institution itself, but in the dissonance it creates with its presence in the reality of the still overly Soviet city of Donetsk and in the myths that it consciously or unconsciously condones through its art projects. In the context of the cultural life of the city, the name “Izolyatsia” (isolation) seems almost too symbolic – it was “inherited” by the newly created platform for cultural initiatives from the former insulation materials plant on whose territory it is located. But today in sounds almost prophetic.

Donetsk’s “Izolyatsia” is like a cultural ghetto where everything is exaggerated correctly, where “everything is as it should be”. But there is something surgically detached in this overreaction. It’s as if a healthy heart was transplanted into a battered and tired body that only looks vigorous and well-groomed because of numerous plastic surgeries.

Finding yourself on the streets of Donetsk, perhaps more than anywhere else in Ukraine, you understand that the Soviet past hasn’t gone anywhere – it is here with us. It has the same pathos of a provincial, but rich city. Only now this wealth screams not in the architecture and decoration of municipal buildings, but in the numerous fashionable facilities bearing the name “Donbass”: Donbass Plaza Business Center, the huge Donbass Arena stadium, ArtDonbass Exhibition Center, etc. Add to all this a rather dreadful idea of beauty and prosperity and how to show it and you have the look of modern Donetsk.

There is still another tangible feature that I haven’t seen anywhere else – the dramatized cultivation of the importance of the region, and not even the importance, but the ostentatious pride in the industrial power of Donbass and the people in orange helmets that create it. For me, as someone whose consciousness was formed in independent Ukraine, where the life of miners is described only in the news and only with a negative connotation, the city’s ideological program seems a bit too disingenuous. That’s why I was surprised by the fact that people living here continue to not only celebrate but sincerely congratulate one another on Miner’s Day, which, incidentally, coincides with Donetsk Day (or just this year, on occasion of the president’s visit…).

How do all these observations by a tourist relate to the celebration of art that Izolyatsia put on for us? In the most direct way. I asked myself the following question while exploring the project “1040M underground”: do all these people have the right to something that from my point of view is injustified, and thus the disingenuous pride? Do they hold on to the myths of the past because without them the present looks frighteningly bad? Isn’t this project a sort of restoration of Soviet propaganda, but devoid of its main component – truly powerful and functioning heavy industry?

The project’s author, Cai Guo-Qiang, is an openly leftist Chinese artist who doesn’t hide the fact that one of two people who greatly influenced him was Mao Zedong, and the other was his grandmother. He is a longtime resident of New York, where he has created a small “manufactury” for the production of art, which is currently his studio. But he still communicates with the public only through an interpreter, who relays his thoughts expressed in Chinese. You have to agree that it is hard to imagine a more perfect candidate for a project in Donetsk.

The project includes two installations that are located in different buildings of the former Izolyatsia plant. The first is called “Monuments on Shoulders” and is made up of 27 unique portraits of miners from two Donetsk mines – a coal mine and a salt mine. Their uniqueness lies in the fact that they are the product of the collective creativity of Cai Guo-Qiang, 18 local artists and several dozen volunteers who helped with the explosions. The process was shown live online and resembles a magical ritual.

Before starting the project, the artist wanted to descend into the mine to a depth of 1040 meters and follow the same route the workers take every day. According to the organizers, this left a very strong impression on him, though there’s hardly a civilized person in this world that can remain indifferent to inhumane working conditions. Afterward, 18 Donetsk artists made portraits of the miners that had just risen to the surface and transferred them to large canvasses. Then the master took over.

Cai Guo-Qiang creates his works using gunpowder, as if in collaboration with the natural forces of nature. The artist found a way to tame and domesticate fire, forcing it to work for him, transferring onto the canvas the most technically difficult images to create. Such skill, you must agree, can not but strike the imagination of even the most sophisticated viewer. For some reason it brought to mind the old saying by Michurin: “We cannot wait for favors from Nature. To take them from it – that is our task.”

The exhibit at the Izolyatsia building featured two mounds – one of salt, the other of coal (incidentally, the most expensive of its kind, whose chemical formula is identical to that of diamonds). The portraits, made using the difficult technique of igniting gunpowder, were mounted in special frames and placed atop these mounds. Identical frames were used in Soviet propaganda parades, only then they contained the portraits of leaders.

Despite the obvious heroic pathos and admiration for the difficult profession of the miners and their hard work, the realities of Ukrainian life forced me to think of these mounds with portraits as nothing more than symbolic burial mounds, with hope for a real, not symbolic, revival of industrial power buried inside them. Perhaps this happened because the sound a miner’s helmet makes when it hits the pavement in front of the Cabinet of Ministers building in Kyiv is my only childhood memory of miners.

Observing the current situation in Ukraine, made possible not without the participation of natives of the Donetsk region, I just can’t believe that the miners portrayed in the portraits at Izolyatsia can be the country’s heroes. They are true heroes, but, unfortunately, not in the collective subconscious of Ukrainians, but in the everyday reality of their families, for whom they risk their lives. The new country has long had new heroes, such as the players of the football team with the same name that look down conquettishly from glossy magazine covers and oil paintings in expensive gilded frames.

The second project presented by Cai Guo-Qiang is called “Nursery Rhymes”. It consists of nine mining carts that were once used to carry coal and have now become artifacts. Lined up in a diagonal in a factory workshop destroyed by fire and rocking like cradles, each one of them “nurtures” its image in the series: culture, war, relationships, love, death. It shows all the diversity and flow of life made possible by industrialization. The nostalgic pathos in Cai Guo-Qiang’s statements is very sincere, it is easily read, and it touched me, but, unfortunately, it’s not convincing. Maybe because it’s all happening inside a former factory whose workers, before the creation of this installation, exerted far greater effort than the artist.

This all probably sounds a bit cynical on my part, because in fact the project “1040m underground” was a very honest project that the organizers and author deserve to be proud of. But returning to the question that bothered me during my visit to the exhibition, I, unfortunately, can’t find its justification in the realities of modern Ukraine. There is too large a discrepancy that real art can’t not ignore or hush up. For someone aware of Arsen Savadov’s photo series “Donbass Chocolate” and Viktor Marushchenko’s “Dreamland Donbass” that were able to capture the sickly and aching gap between ideology and reality, past and present, Cai Guo-Qiang’s project will inevitably look like a naive and superficial restoration of the myth of the industrial past. 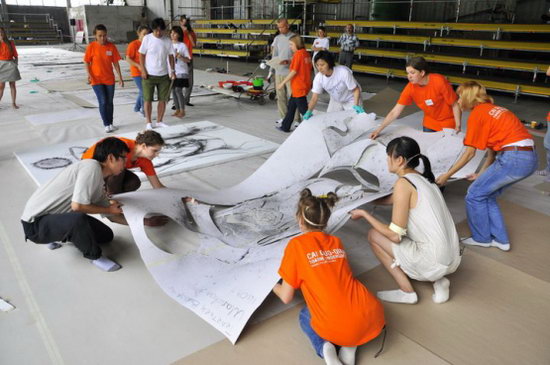 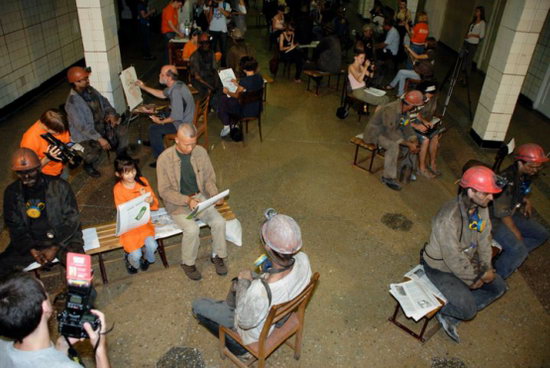 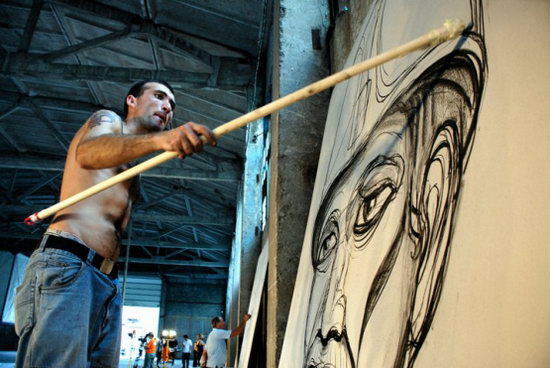 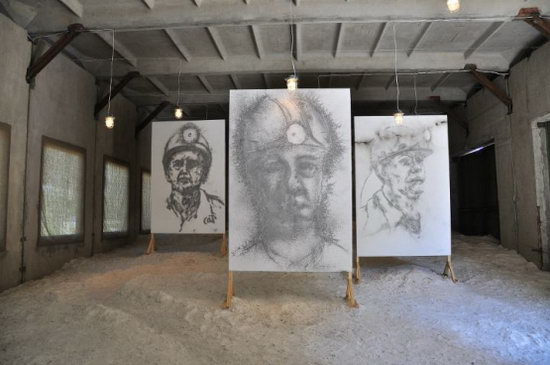 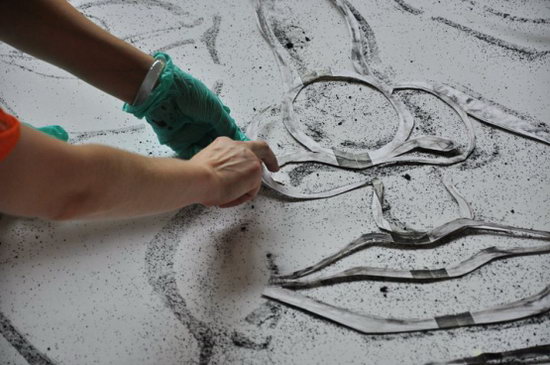 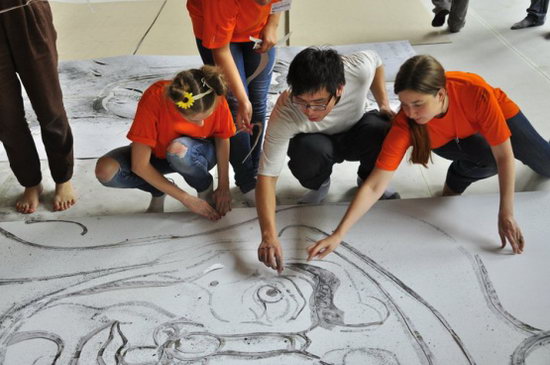 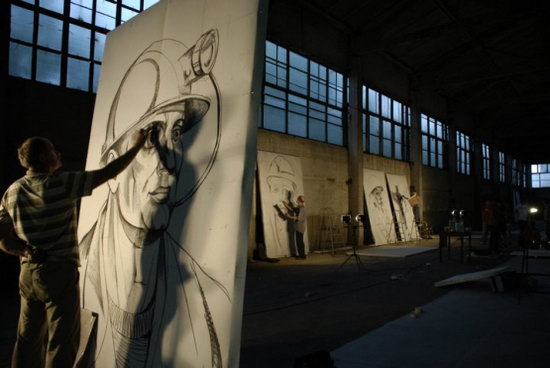 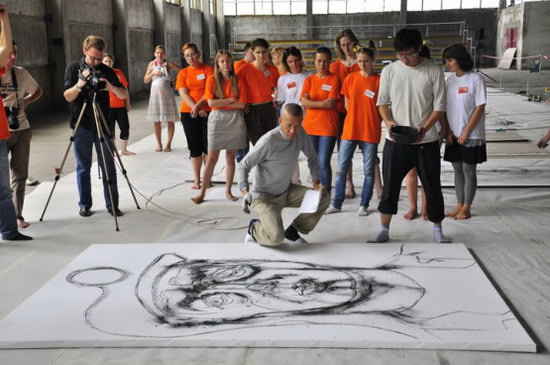 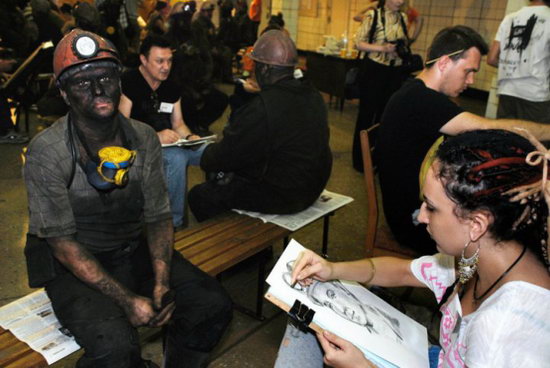 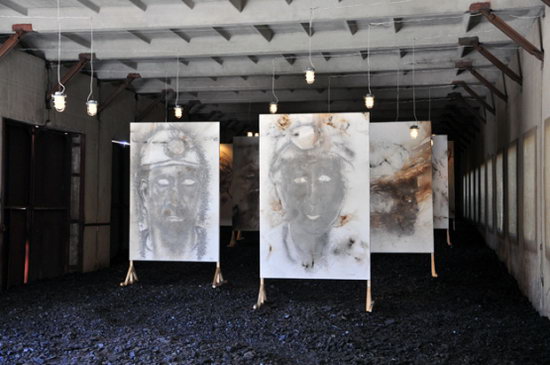