“The Journey to the East” opened on August 5 (until September 30) at the Galeria Arsenal in Bialystok, Poland. Curated by Monika Szewczyk, along with a team of local curators from the countries featured in the exhibition – Armenia, Azerbaijan, Belarus, Georgia, Moldova, Ukraine and Poland – the comprehensive show featured artworks filling two gallery spaces, objects in the public space of Bialystok, performances and a day-long conference. The project is being realized within the Cultural Program of the Polish EU Presidency in 2011, and will travel later in the year to Mystetskyi Arsenal in Kyiv (October 30-November 11) and MOCAK in Krakow (December 1, 2011-January 29, 2012).

“The Journey to the East” deals with “communication, understanding, and love – a strong feeling dictating a positive reaction to the other, even if it is not in line with one’s interests,” as articulated by concept co-author Anna Lazar. While the project aims to create a “new communication community” based on love rather than competition, the artworks in the galleries include a surprising abundance of imagery from Soviet everyday life – from images of Lenin, to photographs of dilapidated Soviet architecture, to an installation resembling a flea market with typical household wares from the 1990s. This looks like an attempt to call up collective nostalgia for a community of interpersonal relationships that seemingly existed in the latter decades of the USSR, when people were bound by common lack of material goods and opportunities for personal advancement (in contrast to the competition that structures life in neoliberal capitalist societies).

Here, East and West are considered by catalogue contributor Maria Anna Potocka as contrasting conceptual conditions experienced by Poland (and other countries represented in the exhibition) during various stages of transformation from socialism to capitalism. “East” represents artistic freedom from the temptations of the market, while “West” symbolizes opportunity for international contact, economic development, political freedom. Potocka’s analysis points us to read the works of artists from the geographic East in light of this transition from one conceptual condition to another and elicits an investigation of difference in relation to oneself. How do the artists, many of whom are practicing without an official contemporary art context, perform this communication with themselves? In addition to reflecting on their Soviet past, others, like Alevtina Kakhidze (Ukraine), in her documentary project I’m late for a plane that’s impossible to be late for, reflect on the conditions and context in which they are working today. While this practice of self-reflection is imperative for beginning communication with another, simply showcasing the diverse points of view and experience of various Eastern artists in one place is not enough to form a “communication community.”

However, the exhibition did reveal some new strategies for artistic activity – adequate for present global conditions – emerging from art practitioners from the East that subtly manifested themselves during the opening weekend. Conference participant Jahangir Selimkhanov (Azerbaijan) introduced the concept of nazira, an Arabic word, which denotes “a method of borrowing form, rhyming pattern, verse measure, plot or metaphor from a peer and making your own poem a sort of homage, emulation or mockery” used in classical Eastern poetry. In his view, nazira can be considered a labor of love (or “selfless creativity”), in which an artist responds to the work of another with empathy, through a process of subjective creative transformation. Selimkhanov elaborated a possible practice-oriented model in which “each artist is asked to submit a ‘nazira,’ a ‘montage’ of deconstructed elements, a commentary, a paraphrase of works by fellow artists, which are also exhibited within the shared space – in the same room or in an adjacent one.”

Meanwhile, performance group TanzLaboratorium (Ukraine) proposed such a concept for their LOVE-scape, which they presented during the opening weekend of the exhibition. The artists performed a structured improvisation based on their personal impressions from the exhibition and incorporating elements of the artworks they had seen. There was one other key element in the work: as audience members were admitted into the space before the start of the performance, they were asked to sign a contract binding them to keep in mind the question “Why am I looking at this?” while watching. The other party – the artists-performers – were also holding this question in mind while working. This gesture, in a sense, extends the work of nazira to the viewers; it gives them their own “creative-interpretive tool” for working during the performance rather than remaining passive spectators.

Thus the model of nazira distributes responsibility to all engaged with a work of art. No longer is the artist – producer, and viewer – consumer. As part of the exhibition, a number of artworks in public space communicated directly with local visitors. These objects, embodying the thought of their respective authors, were allowed to lead a life of their own, provoking curiosity and processes of exploration in viewers-users-players. Stefan Rusu’s (Moldova) Open Flat – a structure resembling a small apartment, but without enclosing walls – came alive through the thoughtful play of passersby. Veaceslav Druta (Moldova) built a Swing for two persons – two swings one behind the other, which demanded that the two persons swinging find some relationship, either negotiating a way to be in sync or through collision and conflict. One person could also lie down on both swings and experience a similar mode of negotiation between the two parts of his/her own body. Here the artwork is less of an expression, but rather an invitation for another to build his/her own experience, be it physical or in the realm of thought.

Nazira becomes not only an artistic strategy, but also a state of mind. The nature of its “selfless creativity” first demands intense scrutiny of the initial object. It need not be judged as good or bad, but must be very carefully examined in order to transform it. The next step requires an articulation of the responding artist’s (or viewer’s) own interest in the object, a revelation of his/her subjective relationship to the object of interpretation. Such love demands self-sacrifice, both on the part of the responder (who takes as a starting point for his/her own work the expression of another artist rather than his/her own personal experience) and on the part of the “giving” artist who cannot control the reading, interpretation, understanding of his/her work, and certainly cannot foresee or influence the subsequent transformations engendered by his/her initial gesture. Imagine this as an infinite chain of reciprocal perception and articulation, in a dispersed manner, where each individual is continuously looking, reflecting, transforming, expressing.

In the models proposed by Selimkhanov – like an artistic dialogue between two incongruous practices; a linear progression of artworks, each one interpreting the previous one – what becomes visible is how the artist thinks. Also, new information may be revealed in the dialogic space between works: interpretation, misinterpretation, empathy and antagonism can elucidate new meanings or thoughts. It is always necessary that there be a “third” – observer (or event) – to determine the relationship between “original” work and the responding interpretative work. Selimkhanov writes, “The process of perception and comprehension might then become more intriguing as commentary by other artists would possibly be of assistance in grasping hidden layers of meaning or in seeing constructive threads hitherto remaining ‘invisible,’ or conversely, in making the process of understanding the artwork even more puzzling and confounding.”

The question of “quality” also changes. There is no basis to judge whether the responding artist has read or interpreted accurately. The means used to respond produce the form of the expression. For example, Ukrainian artist Anatoly Belov’s opening night performance demonstrated the reciprocal interpretation-communication of diverse artists in the immediate moment. Belov arrived in Bialystok with a selection of his own songs, which he presented to a local brass band an hour before they were to give a concert together. He asked the musicians to select melodies which they already knew from memory to accompany his compositions. The resulting collision of lively brass tunes with Belov’s mystical shrieking and comic lyrics produced a new reality energized by the risk of not knowing what to expect.

We could extend the idea of nazira to the scale of curators and critics, whose work today is not dissimilar from that of artists. If the value of art workers lies in their ability to creatively transform their own subjective experience, then we begin to see art processes like the exhibition “The Journey to the East” as a means for extended dialogue and discussion based on empathy and love. For the three-day opening ceremonies, which included a day-long conference addressing the project’s themes from the perspective of art practitioners from the featured countries, many of the participating artists were invited to Bialystok; and in the evenings, all the guests were feted and fed, induced toward conversation and interaction that continued in their common hotel.

Thus a community of people, who may have seen each other’s work online or in other exhibitions, came to life in the “neutral” territory of Poland (EU) for a few days, exchanging ideas, networking, establishing lines of communication for future interaction. Each individual is, of course, shaped by the territory in which s/he lives and unique historical experiences, but from the point of view of nazira, this “identity” becomes a collection of qualities that affect the individual’s contribution to the dialogue, rather than an endpoint for categorization, classification or grouping. We move out of the horizontal plane of social, political, economic differences and into the space of subjective human gestures and reactions. Thus issues that were earlier pertinent – issues of borders, of East and West as political and geographical constructs, of the Other as political or ethnic subject, etc. – become less relevant.

To return to the question “Why am I looking at this?” employed during TanzLaboratorium’s performance – this strategy unites artists and viewers in a common labor of looking and self-reflection (one in which they choose to participate as a “labor of love”), thus forming a temporary community around this shared conceptual practice. Perhaps the value of “The Journey to the East” is not in prescribing new models for interaction based on love instead of capitalist competition, but in producing a space where in some instances (though not at all levels or as a whole) these models can be performed, articulated, made visible. But I believe that this can be recognized only by one who also makes the effort to take part in the chain of perception, interpretation, subjective examination and transformation of the material presented. 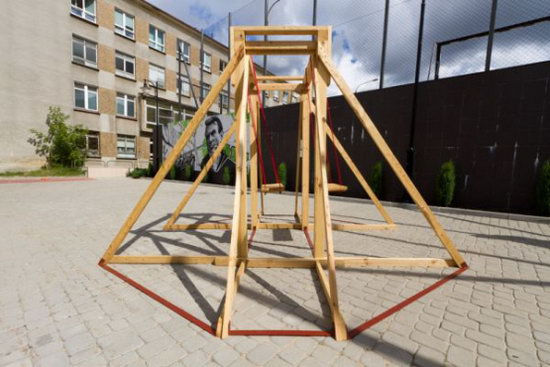 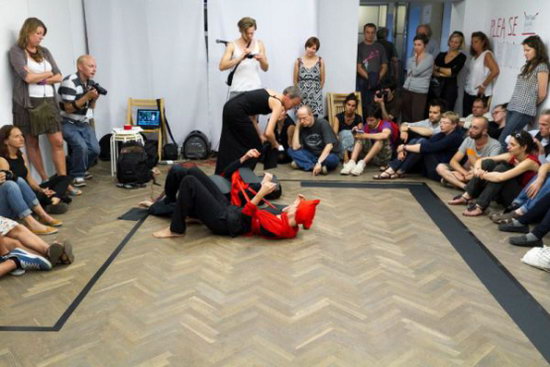 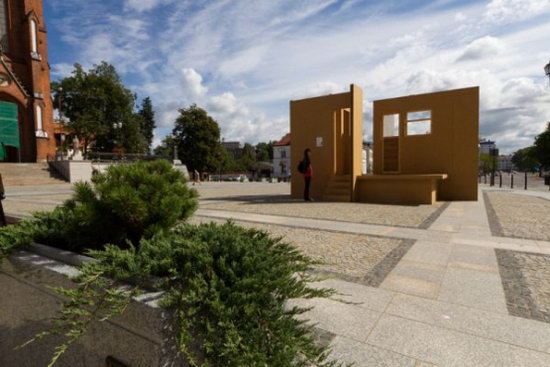 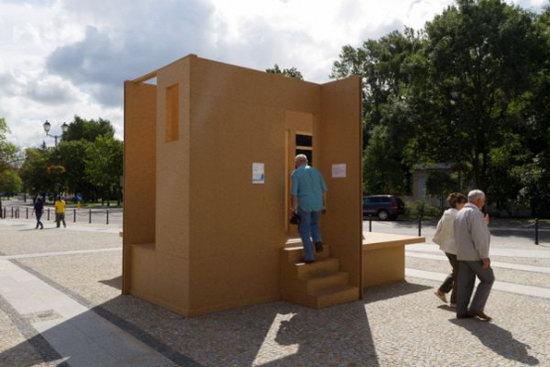 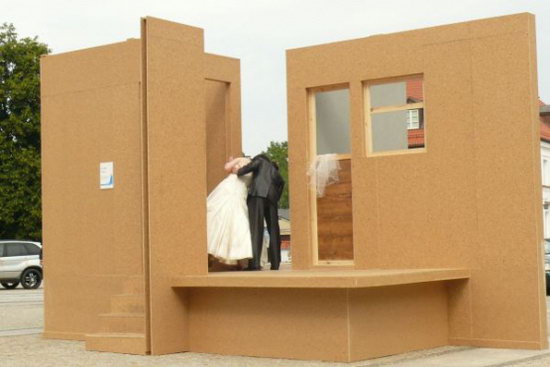 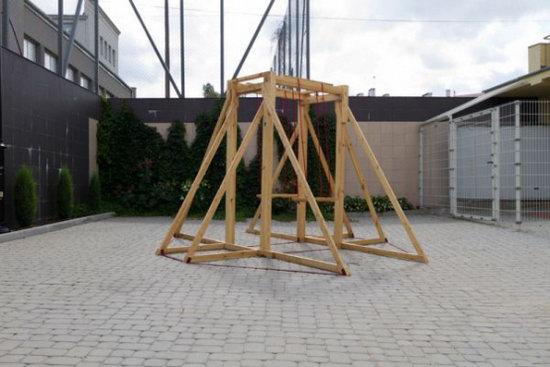