Art, money and the financial crisis 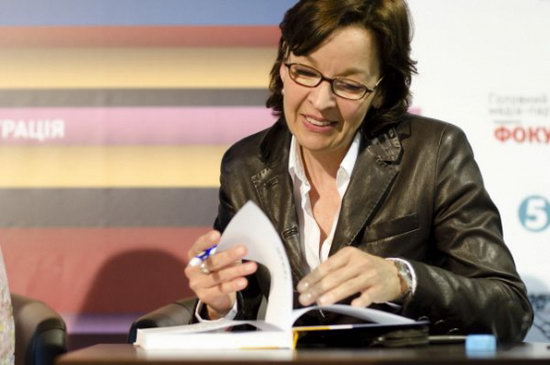 The beginning of June saw a meeting with German critic and consultant, author of the bestseller «Hype! Art and Money», Piroschka Dossi, that took place during the “The Book Arsenal” international book fair at Art Arsenal.

This sharp and ironic book was published in 2007, just before the financial crisis, touching off a wave of discussion in the art world. It presents a close analysis of the relationship and mutual influence of art and money since ancient times. She tells the reader a bright and engaging story of the development of global capitalism and the role of art as a perfect ground not just for investment, but for speculation.

The art market is a strange grey zone within the global market that does increase monetary value, but against all normal market laws. And according to Piroschka it is the gray zone within that grey zone in contemporary art. It is contemporary art that went beyond the more or less objective criteria of craftsmanship, of an original and a copy, of certain standards, that is making the big sales nowadays.

After her talk, Piroschka Dossi answered a few questions from KORYDOR.

Kateryna Botanova: After the book you came up with a film series for ARTE, exhibitions, articles. Why are you so interested in the issues of art and the market?

Piroschka Dossi: This may have three reasons: 1. my curiosity and my wish to understand the deeper workings of the world we live in, 2. my educational background which comprises law, art history and economy, and 3. the fact that I have been married for two decades to an artist, so I know the reality of artists? lives from my own experience.

K.B.: Why is contemporary art making the markets now?

P.D.: It is the fascination for the new, which, besides, drives not only the art market, but consumption as part of the economic system, the need of the newly rich to create visible identities, which money alone cannot do, and the profit potential which lies in the discovery of young artists who have not yet been positioned in the context of art history.

K.B.: What influence did the financial crisis have on the art market in general?

P.D.: The art market collapsed, and especially collectors of contemporary art saw the economic value of their collections dramatically drop. This coincided with a loss of trust, which hit not only the segments which had been driven up to astronomic price levels during the previous hype, but also all those artists who did not profit from it. This is unjust. But markets are not just, they are just efficient.

K.B: I think I won’t be wrong if I say that your book is quite harshly ironic. You certainly unmask a lot. But an interesting fact is that in two reviews published in Russia (as your book was recently translated in Russia), I saw that it is unmasking the contemporary art that was noticed. Is that what you really were unmasking?

P.D.: Art is supposed to be something serious. Sometimes it is, sometimes it isn?t. Artists can be jokers, some of them overtly like the Swiss artists Peter Fischli and David Weiss, others covertly like Jeff Koons or Damien Hirst. They are playing with the market, with the expectations of their audience, and everyone is free to take their work upfront or to see through the surface and enjoy the joke in it.

Since there is a market for art, artists are struggling for their creative independence. Even though the market was a liberation insofar as it liberated art from feudal domination, it created new constraints. The artist has to produce something that is accepted at least by a part of the audience. These obvious or hidden jokes are symbolic acts of independence, and, if you want, the biggest joke was told by Damien Hirst, who auctioned off his works with a record breaking result one day before the crash of Lehman Brothers, which triggered the financial crisis and the subsequent collapse of the art market. He put himself, as artist and entrepreneur, on top of the art system and the market.

K.B.: In your book you draw a circle of a gallerist selling art, a critic making the art famous, a museum ennobling it, a collector paying for it. Where does the audience go in this vicious circle? And is there a place for such a thing as non-commercial art?

P.D.: The audience goes mainstream. This is not a bad thing, because it means at least discovering contemporary art. Works of art, which are accepted, bought by large collectors, shown in blockbuster shows are ?low risk?. Those individuals who are curious and adventurous will move on and start to make their own discoveries in search for what art can really do: opening the windows of perception.

K.B.: What is the place for non-commercial art? Why is it important? And how can it survive (being outside the market)?

P.D.: Non-commercial art is a cultural laboratory, where talents can develop their visions free from economic considerations. A free space is necessary for any creative development. It needs the backup of passionate individuals and institutional support.

The meeting with Piroschka Dossi was made possible with support of the Goethe Institute in Ukraine.