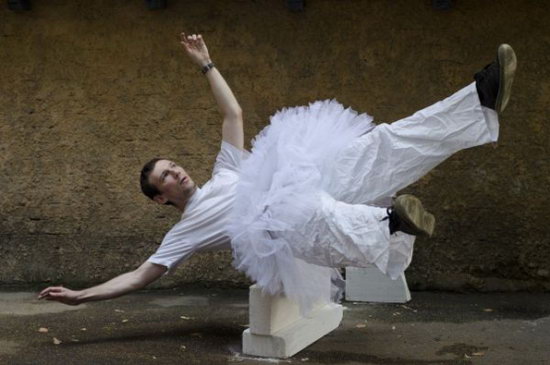 June 27 marked the launch of “Performativity” - an educational art project of the TanzLaboratorium Ukrainian performance group. Over the course of two weeks, three curatorial projects addressing such philosophical themes as “time”, “absence” and “the other side” will be staged in different locations in Kyiv. The projects are curated by Larisa Venediktova, Larissa Babij, Oleksandr Lebediev and Olga Komisar.

Alina Sandulyak: Tell us about your educational art project “Performativity”.

Larissa Babij: The project in and of itself is performative but it is also research into what this educational project is and can be. It’s an attempt to treat an educational project as an artistic event. These don’t necessarily have to be lectures where you get certain information from an expert. You can also have a format where participants gather in the same space and work in laboratories or lectures, where there isn’t that apathy inherent in the more traditional and conservative system of education.

Larisa Venediktova: The “Performativity” project also differs from academic education in that it doesn’t have that focus on the future – I’ll learn something and later apply this knowledge. I think that sort of approach is inherent not only in academic education but all master classes today. In “Performativity” the focus is different: everything happens only “here and now”. It happens or it doesn’t happen.

Although we plan for the project to be an annual event, it’s unclear what it will be like going forward. Its structure, content or objectives may change or transform. The project in itself is an artistic product even before its implementation. I’ll provide an example. We, TanzLaboratorium, have a dance or performance exercise every day, and this exercise is preparation for something, the building of something. It is an artistic product. The same with the project “Performativity”.

А.S.: Tell us more about your curatorial projects within Performativity.

L.V.: The project I curate is called “The Singularity of Absence”. The topic of absence is rather delicate. Modern civilization strives for positivity. So when someone starts to talk about “negativity” and “absence” as something good, interesting and beneficial, they’ve viewed somewhat cautiously. I’m not interested in what a person can do, I’m interested in what he can’t do. The same with “absence”: it interests me more than “presence” – a popular concept in artistic practice today.

For example, Vladimir Bibikhin expressed an interesting idea in his series of lectures “The World”: “Despite my desire, I can’t disappear. The only way to disappear is to talk about something in such a way that you will think about it and forget about me.”

It seems to me that this absence, including of the artist, is the great potential of contemporary art. A person is able to convey a message in such a way that he or she disappears. This is one version of absence. The other is the insufficiency of human existence in general, an ontological question. The gap between what a person is and what he could be always leaves hope for the superhuman in someone. This gap is what interests me: the gap between the human and superhuman. The person doesn’t exist in this gap – he’s absent.

Oleksandr Lebediev: The project I curate with Larissa Babij is called “On the Other Side of the Surface”. The idea arose from our interest in the possibility of working in spaces not specially designated for art: site-specific art. But we want to differentiate this term, which is also used in the name of the discussion “Relevance of Site-Specific Performance in Ukraine” planned as part of this curatorial project, from its usual meaning in the history of art. What we have in mind are any spaces not designated as artistic.

The project raises questions about boundaries between art and life. It considers the potential of art that is not recognized as art. The main idea behind the concept of this curatorial project is to look at the environment and space that surrounds us as a surface. I see the street as a surface, or a canvas or cloth - it’s a transparent material that lets thing pass from one side and the other.

Olga Komisar: My project is called “The Reality of Time”. We have been talking a lot recently with TanzLaboratorium that art dealt with space for so long, that this is no longer possible, and that one of the current trends of contemporary art is the right to thematize temporality. When I began writing the description of the curatorial project, I realized that there are several aspects of the reality of time. One of them refers to Proust’s time lost and time regained, and the other to Groys’ “Comrades of Time” and the idea of helping time. Systematization of temporality essentially means freedom from life.

A.S.: You involved in the project many artists and contemporary art theorists from other countries – Poland, Portugal, Canada, Russia. Who are these people and why did you choose to work specifically with them?

L.V.: We met Joao Fiadeiro, the key figure in Olga Komisar’s curatorial project, a while back. We participated in his laboratory and afterwards continued to work on the themes presented. He is a very interesting individual and what he does is very interesting. His “Real Time Composition Method” is a leading trend in contemporary art in Europe.

Joao Fiadeiro will lead a six-day laboratory during the first week of the project. It’s a research study that will interest people of any creative profession – from writers to artists and musicians. The main objective of Fiadeiro’s method, as well as the creative activity of our group in general, is the so-called blurring of boundaries between genres, demonstrating that they do not actually exist. Ramona Nagabczynska and Wojciech Bakowski from Poland are also participating in our project. Ramona is a Polish dancer and choreographer. She and Vera Priklonska are the dance component of “Performativity”. It’s a great example of contemporary dance.

I know Ramona through her work. Wojciech is a man of many disciplines. He makes cartoons, installations, he has a musical group. Taras Burnashev is also a choreographer and artist that works in various spheres. We also invited Victor Miziano. He will give a lecture on performative behavior in Russian art in the 1980s - 2000s. There will also be a discussion with him.

L.V.: Steven is an architect and artist. He wants to not just come here and talk about his work, but also immerse himself in the local environment. For two weeks he will participate in the project, absorb the Ukrainian environment and contribute his opinion and way of thinking into this space. There will also be a performative work by Ukrainian artist Lada Nakonechna.

А.S.: In the project description you say that “there is a crisis of cultural perspectives in Ukraine.” Can your project change something in the Ukrainian cultural situation?

L.V.: We are all aware of this crisis. I don’t think you’ll find anyone that would say that everything is ok with cultural perspectives in Ukraine. “Performativity” can indirectly influence anything. But this project doesn’t provide answers on how to resolve the crisis or how to improve our cultural situation. It can only show that it’s possible to think differently, to perceive differently, to treat differently what it is you do. It’s just about the possibility of choosing something else. The “Performativity” educational art project in an alternative platform for art education in Ukraine.