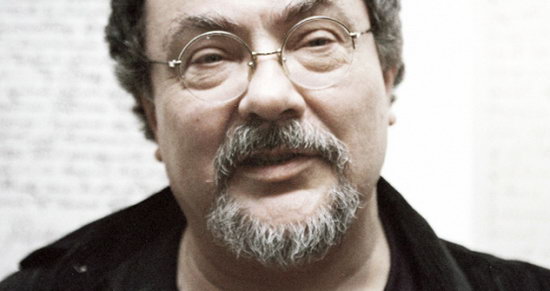 Vitaly Komar is a Moscow-born artist who has been living in the US for many years. In the 1970s, together with Alex Melamid he created “Komar and Melamid” and founded the Sots Art movement that opposed Soviet ideology. Their works were destroyed by the Soviet authorities at the famous 1974 Bulldozer Exhibition and the artists later were divested their Soviet citizenship. In 1978, they both emigrated to New York.
Olena Chervonik: In different periods artists or poets tend to speak about their artistic calling metaphorically. In the age or Romanticism artists saw themselves as prophets who mediated between the high and the low. In Russian Symbolism one of the most recurring metaphors was that of the artist as a magician who could transform the mundane world into a higher reality. And of course one can recall here a Socialist Realist formula of the artist as an engineer of a human soul. Is there such a metaphor that could capture your understanding of the role of the artist?

Vitaly Komar: I think I can use an old allegory of painting here: an allegory of a monkey who is holding a mirror. My function as an artist is to conjure up such a mirror. But that mirror is actually distorted. It deforms to produce a grotesque. So that some features that we normally do not see become very obvious. I can compare myself to such a monkey who holds a mirror and make people look at themselves in a new way. This mirror creates a distance and give people a possibility to see themselves in another light.

O.C.: In many interviews you describe yourself as an outsider, as an observer, a person who does not participate in the mainstream culture but watches it from aside. Do you think that this outsider position gives you a better chance to see and expose cultural stereotypes?

V.K.: Well, that is actually a continuation of the same mirror allegory: I have a distance that allows me to see better.

O.C.: Why do you have that distance? Do you feel as the Other in the American culture?

V.K.: Being the Other and being distant are not the same things. If you create distance it does not mean that you automatically become an outsider. And if you don't feel the distance it does not mean that you are the same as everyone else. I do not feel that I am the Other in the American culture. On the contrary, I feel that I am a part of a larger family which we call human history. I've always liked people who are interested in history; people who perceive somebody else's history as their own. I feel at home with people who know and love history.

O.C.: What kind of myths or cultural stereotypes you detect in the American culture?

V: When I first came to the West I quickly realized that freedom which is strongly associated with the Western set of values is actually a mythical category. Of course there is no absolute freedom. A lot of things that we do are predetermined. It is almost a theosophic problem – how much are we responsible for our choice? The dimensions of freedom are also determined by the length of the rope you are tied up with. There are countries where the rope is very short. And there are countries like the USA where the rope is sufficiently long so that many people manage to live their lives never pulling the rope too tight. Freedom is relative. But there is always this rope. It just can be very short or very long.

O.C.: Is it really necessary to pull that rope tight?

V: It's a personal choice. That's where personal freedom resides: in the choice of pulling or not pulling the rope. God gave people the right to choose so that they would not be automatically with god. Freedom of choice is realized through the fallen angel.

O.C.: Judging by your own life and artwork, especially during the 1960s and 1970s when you were still living in the Soviet Union, you are the person who pulled that rope very tight.

V: That's because the rope was extremely short. And it didn't take much to make it tight. Every government is characterized by the degree of irritability. In Russia the government has always been extremely irritable. Here in the US one needs to committee a crime to get punished. In Russia it's often sufficient to simply make a painting or write a novel to get punished. It's always been a very nervous government. Till nowadays. And it gets nervous because of all sorts of trifles.

O.C
.: At the same time many people in Russia, then and now, never wrote novels or painted or pulled the rope tight in any other way. You, however, have been doing it your entire life. Is is some kind of inner necessity to withstand the system?

V.K.: In the 1960s and 1970s in the Soviet Union I did not understand that what I was doing was some kind of resistance. I was just doing something that seemed to be right. It was just a chain of small choices that eventually led to something larger. It's hard to reconstruct now how it all happened. And another thing I want to add: do not think that it is very important to be in conflict with the system. There were various people against the Soviet system: fascists, for example, or islamic fundamentalist, or christians, or avant-garde artists – all of them were against the Soviet system.

After it collapsed they started fighting with each other because in spite of the fact that once there were opposing the Soviet system together they were drastically different forces. To be against the system does not mean to be something. Anti-Soviet sentiment united many different people. Similarly, struggle against Hitler united Roosevelt, a democratically elected president, Churchill, a monarch subject, and Stalin, a bloody dictator. What did they have in common? A common enemy. The Soviet system as a common enemy united many different people. But if you did not resist the system overtly it did not mean that you were bad or good.

O.C.: It seems that the idea of a “common enemy” is also very applicable to the context of the non-conformist Soviet art. Looking through the works of underground Soviet artists of the time one quickly realizes that often they have nothing in common except the fact that they were not officially recognized by the regime.

V.K.: Yes, there were many disparate groups, ideologically or esthetically disparate. It's like Yalta conference – the same metaphor. Following the saying that enemy of my enemy is my friend.

O.C.: There were many modernists mostly exploiting the tenets of abstract painting. And there were people like you or Kabakov who switched to the postmodern vein. Were you able to relate to each other in spite of these differences?

V.K.: We opposed our 'common enemy' and that was a uniting factor. Of course we argued. But it was a pleasant atmosphere. We were not enemies to each other.

O.C.: After the collapse, after loosing your 'common enemy' have you remained friends?

V.K.: Yes, we still meet. We have our shared experience, something to reminiscent about. Often conflict is something imaginary because some people intentionally create imaginary enemies.

V.K.: It depends on what you mean by 'making art'. I often think about it. Or I make small sketches. It's not really work but it's a sort of preparation. I love to visit museums and especially their cafes. I even thought of writing a tour guide of museum cafes and restaurants. For example, in Frankfurt's Kunsthalle they serve excellent sausages. And Berlin's art museum has wonderful meatloaf. I love to sit outside, on a cafe's patio and watch the street. In such moments I feel like a hermit who watches a river. Even if there are a lot of people around I still feel like a hermit. The best place to meditate is in the crowd. I once argued with one journalist who was trying to persuade me that it was not possible to live meditatively in the contemporary world because we are bombarded with information. I don't think it's true – one can perceive this information like a waterfall, like water that is constantly floating away.
And I also like to have conversations.